Geoff McFetridge’s porcelain enamel steel art panels on the station’s platform illustrate the collective experience of living in an urban environment. Rendered with bold, flat colors on a stark backdrop, Geoff McFetridge’s striking artworks depict communities of people interacting with large abstract shapes. From mothers and children to gardeners and lawyers, the figures are unique and expressive. The geometric forms allude to architecture and city infrastructure, which both support and are supported by the people.

In conjunction with his artwork, McFetridge is planning a workshop with local community members.

Geoff McFetridge, Us as a Measure of Openness

Geoff McFetridge, Us as a Measure of Openness

“I am trying to capture how this city constantly surprises me with its diversity and confounding polarities of experience. Los Angeles is urban in a way that can accurately be described as abstract.” 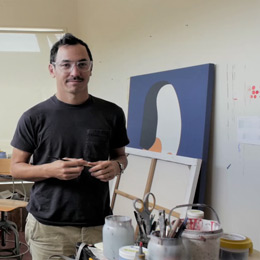 GEOFF MCFETRIDGE (b. 1971) is a multidisciplinary visual artist, graphic designer, illustrator, animator and avid cyclist known for his graphic style characterized by fine lines and bold colors that use repetition, iconography and simplicity for puzzle-like effect. He earned a Bachelor of Fine Arts from Alberta College of Art and Design and Master of Fine Arts from California Institute of the Arts. McFetridge’s art has been featured in solo and group exhibitions across the globe, and his designs have been recognized with a number of awards. He has completed several public mural projects, as well as an artwork commissioned for Ottawa Light Rail Transit’s Lyon station. McFetridge is the winner of the 2016 Cooper-Hewitt Smithsonian National Design Award and was awarded the AIGA Medal in 2019.