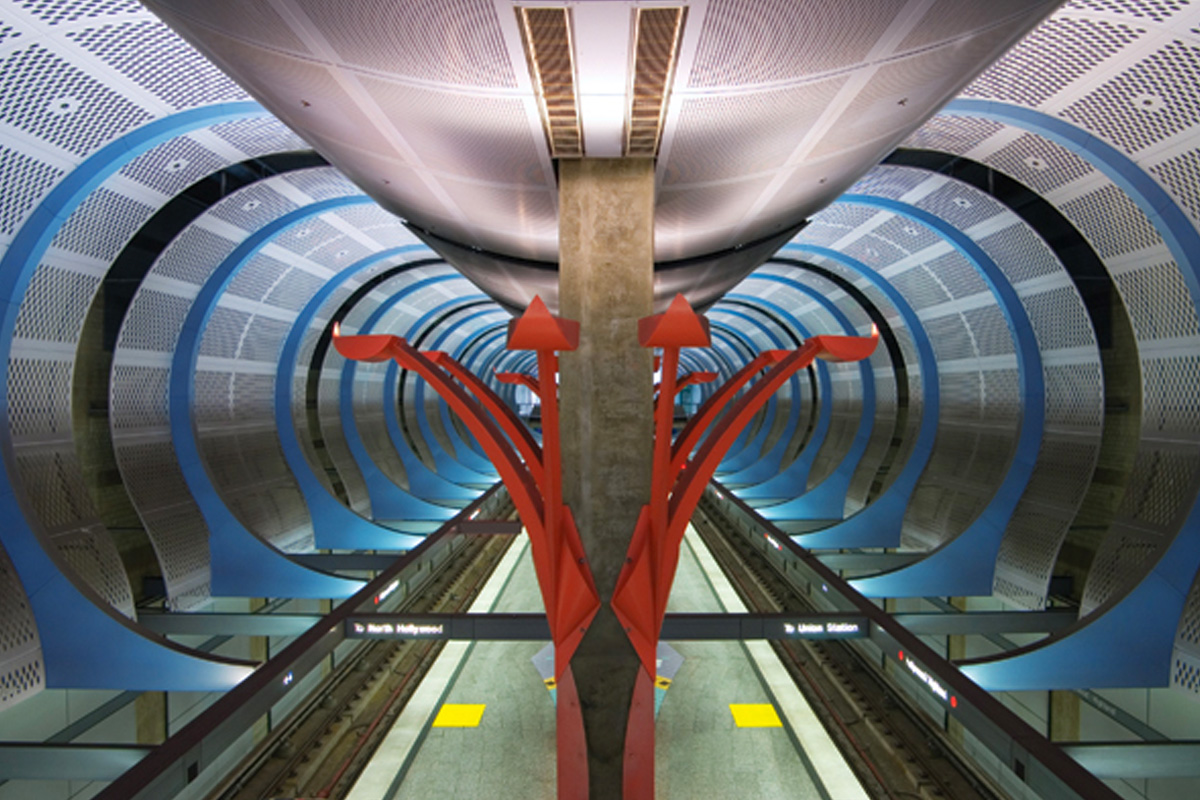 “Hollywood” connotes a place, a street, an industry, myth, fantasy and spectacle: a distinct culture known throughout the world. The core, or essence, of Hollywood prompted the artist/architect design team to consider, “What sleeps beneath the city at the corner of Hollywood and Highland?” and influenced the creation of a station that honors the cinematic, theatrical, and fantastical heritage that is Hollywood.

The entrance to the station is announced with a sweeping metal canopy. Passengers entering the station are greeted by a dynamic display of artist-created images projected from theatrical lights suspended from a sculptural ceiling truss.

The concrete station box has been transformed by this team into a telescoping, organic form where rhythmic breaks in the walls and ceiling panels reveal structural supports; in much the same way, movie or theater production stage sets, or the nearby Hollywood sign, are facades held in place. Sculptural forms are attached like organisms to the platform columns and boldly illuminate the station’s cavity. One has the sense of being in the depths of a giant creature.

The area’s surrounding architectural legacy includes the former Grauman’s (now Mann’s) Chinese Theater, the El Capitan Theater, the Egyptian Theater, and the Hollywood Bowl: all fantasies in their own right, and influential landmarks for this design team. Likewise, traditional early Hollywood musical extravaganzas influenced the creative collaboration on this station, resulting in a heightened sensory and theatrical experience for all those passing through. The station represents a dramatic complement to Hollywood’s cultural past as well as a prominent salute to its future.

“What I wanted to do was to give the station bones, a pelvis, a hairdo…the way out stuff that had never been done. A lot of people thought I was crazy, but I can truthfully say one thing: I gave them a show! Today, with the world in such a chaotic state, we sure can use something great to look at. Let’s turn the wheel and bring back once again the greatness that was Hollywood.” – Sheila Klein, adapted from a statement by filmmaker Busby Berkeley

“All film, to one degree or another, is about fantasy. The architectural tradition of Hollywood Boulevard is also about fantasy. We wanted the fantasy of this station to bowl people over as they entered. This station embodies just a small fraction of the energy and creativity that has made Hollywood an internationally recognized icon.”  – Doug Dworsky

DWORSKY ASSOCIATES (now CannonDworsky) was founded in Los Angeles in 1953 and serves clients throughout the U.S. and abroad. The California Council of the American Institute of Architects named Dworsky “Firm of the Year” in 1985 for their design excellence. The firm has been recognized through numerous design awards and international publications. Doug Dworsky served as the lead designer.

SHEILA KLEIN’s public projects include Los Angeles International Airport’s air traffic control tower and “Vermonica,” an urban installation of street light poles in a Hollywood parking lot. Klein has worked with many unconventional materials such as linoleum, street signals, city light poles, and bathtubs. She has taught at Otis Art Institute, Los Angeles, and now resides in a rural community outside of Seattle, Washington.