Alison Saar’s Paraje is a reminder of the surrounding terrain’s natural history and is designed to offer transit users respite from the sun and wind. Located on the west end of the station platform and measuring 10 feet high by 10 feet wide, the cast stainless steel sculptural windscreen contains imagery inspired by the nearby Gardena Willows Wetlands Preserve, which is one of the few remaining pristine willow marshes in Los Angeles. Historically, Parajes were camping sites or rest areas in the southwestern United States that offered water and provisions to travelers and their animals. The title directly translates from Spanish to mean “a resting place between two destinations.” Saar’s detailed bas relief depicts a willow, a wetland tree known for its soothing shade, among cattails and dragonflies. A figure emerges from the lush tree on the east face of the sculpture, with the folds of her dress portrayed as roots and upheld arms as branches. The sculpture’s base is inscribed with a poem by the 12th-century Japanese poet Saigyo: “by the roadside; cool spring water flowing; in the shade of a willow; I stop; and linger.

Detail of Paraje, depicting the willow marshes the artist discovered in the area during her research for the project.

Detail of Paraje. The sculpture’s west face depicts a willow tree, while on the east face a willow spirit, shown here, emerges mysteriously from the tree. The folds of the willow spirit’s dress become the roots of the tree and the spirit’s upheld arms become branches.

“It is my hope that this artwork will help [viewers] to imagine an earlier time when the area was a haven of marshlands, and perhaps it will encourage them to investigate the nearby preserve.” 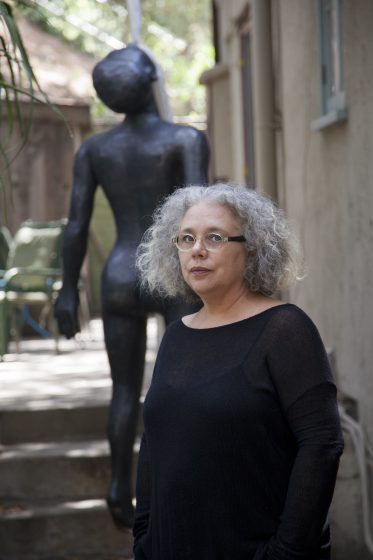 ALISON SAAR (b. 1956, Los Angeles) earned a Bachelor of Arts from Scripps College and Master of Fine Arts from Otis Art Institute (now Otis College of Art and Design). Her work has been exhibited throughout the United States and abroad, and is in the permanent collections of numerous American museums, including the Los Angeles County Museum of Art, Metropolitan Museum of Art, Museum of Fine Arts Houston, Museum of Modern Art, New York, Walker Art Center and Whitney Museum of American Art. She is the recipient of grants from the Guggenheim Foundation, Joan Mitchell Foundation and National Endowment for the Arts, to name a few. Among her many public commissions are monumental sculptures for the Hall of Justice in downtown Los Angeles, Harriet Tubman Memorial in New York and Monument to the Great Northern Migration in Chicago.