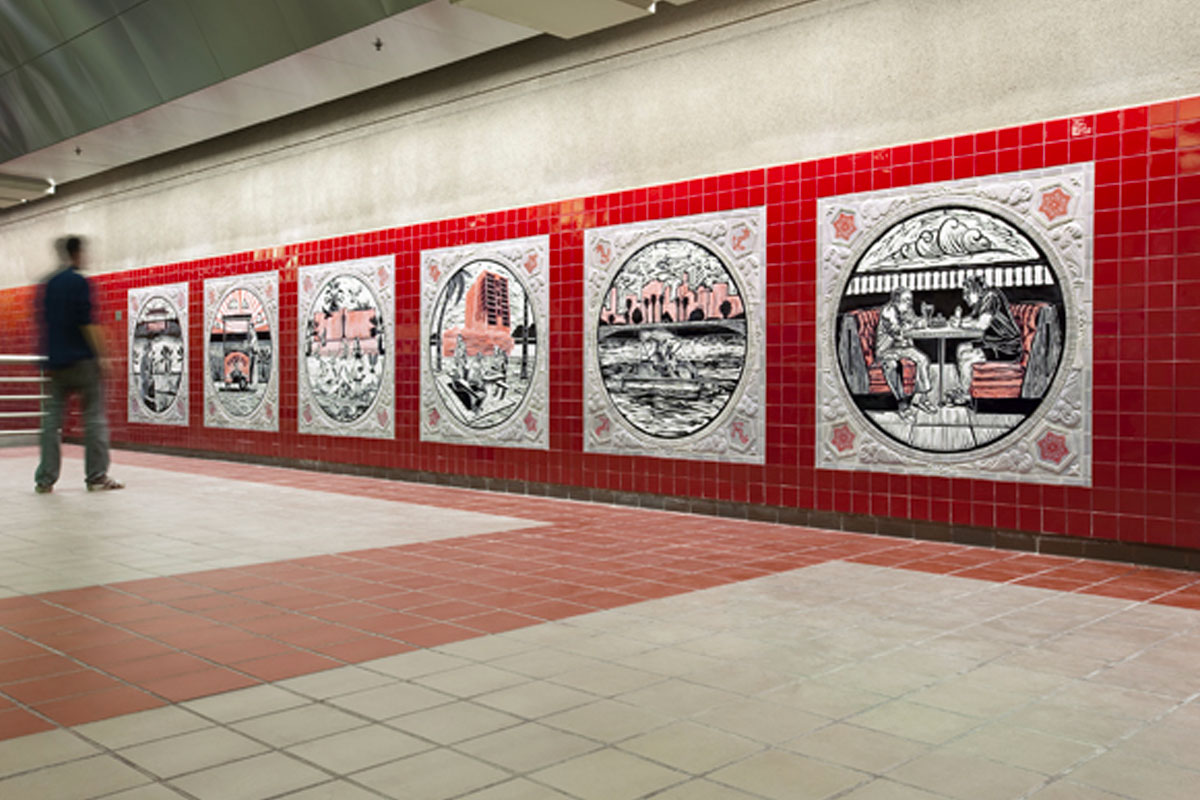 The ceramic mosaic tile mural is divided into 13 panels installed along two facing mezzanine walls representing both halves of the park separated by Wilshire Boulevard. Each artwork contains a black and white tableau centered in a circle contained within a square panel. The border space between circle and square is glazed in a cement gray color to represent industrial building materials and includes alternating art deco motifs in the corners. The motifs were discovered throughout the park and neighborhood. Also included are significant historical buildings throughout the park’s 120-year history. The ceramic mosaic panels were created by the artisans at Mosaika Art & Design studio in Montreal, Canada.

“I found the story of the park and its fluctuating energy stimulating and intriguing. I developed my concept around the idea that MacArthur Park is an urban oasis. It was my goal to create a public work, which celebrated the 120-year-old history of MacArthur Park and the people who make use of it.”

SONIA ROMERO (b. 1980, Los Angeles, CA) is a Los Angeles-based artist known for her dynamic combination of printmaking, paper-cutting, painting, and sculpture which she incorporates into her fine art and public art commissions. Calling upon her own experiences and perspectives as a multiracial person, Romero creates work that reflects the cultural diversity found in the communities of Los Angeles, and themes relating to the universal connectedness within humanity as well as its relationship to the environment. Her distinctive paper-cut shapes and patterns can be found in steel, tile, or paint in one of her many large-scale permanent installations in notable locations such as Little Tokyo, the Mariachi Plaza and MacArthur Park Metro Stations and the Artesia County Public Library. Romero, whose work has been acquired into the collections of prominent institutions including Los Angeles County Museum of Art and the Smithsonian, grew up in an artistic household in Echo Park and formally studied at the Rhode Island School of Design.