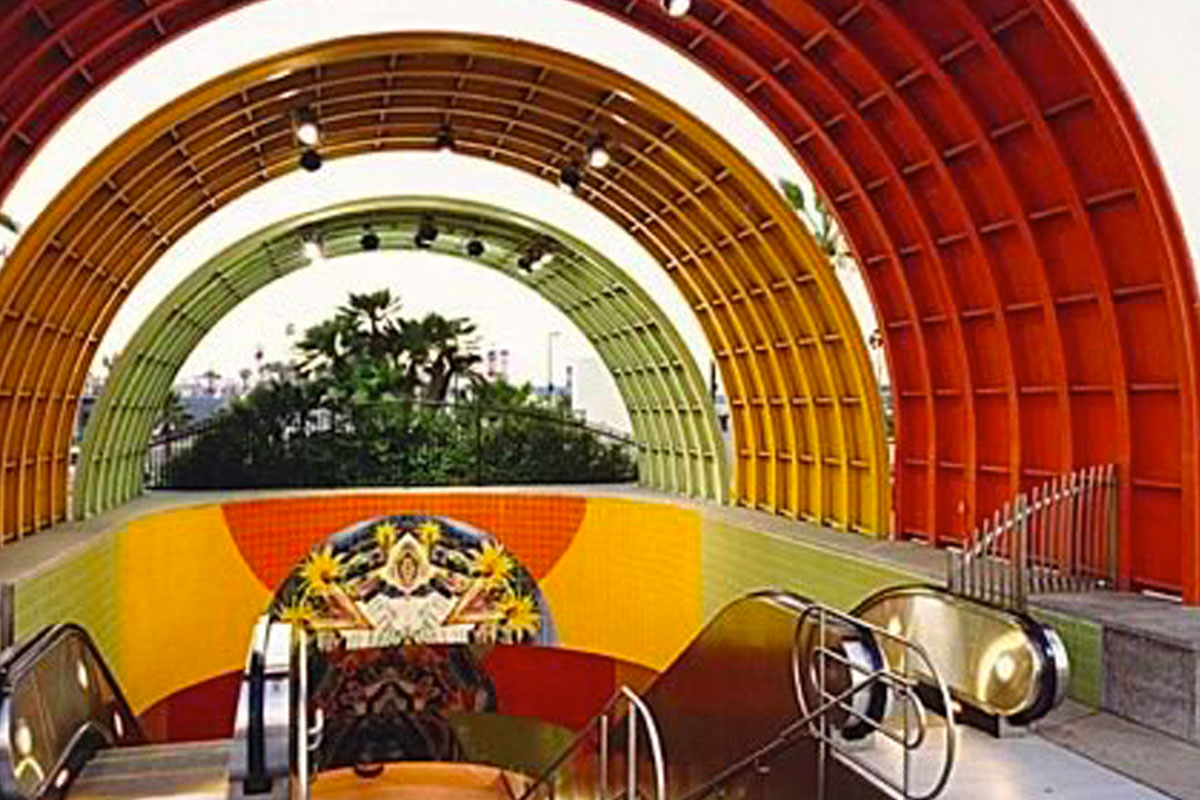 The overall theme and design of the station was established by artist James Doolin and architect Tanzmann Associates, while artist Anne Marie Karlsen designed and produced the nearly 4,000 square feet of hand-painted tile murals. Doolin and Tanzmann’s design for the station celebrates North Hollywood, honoring the broad valley where succeeding generations of immigrants have come to find “The California Dream,” and recognizes the diverse people who continue to come to this area to fulfill their aspirations.

Curves, arcs, and circular motifs contribute to an overall design that surrounds transit patrons in an environment that is at once dramatic, energetic, and magical. Bright and bold green, yellow and orange tones recall the area’s rich history as a citrus and peach-growing capital.

Travelers will make their way into the station down a dramatic entrance stairway that flares out beneath three colorful arched canopies. Overhead, Karlsen’s large tile murals depict kaleidoscopic collages that reflect the station’s theme of “The California Dream.” At the base of the stairs, a chamber bathed in natural light from above provides an inviting prelude to the mezzanine gallery, where circular and semi-circular niches act as giant kaleidoscopic viewing lenses that reveal breathtaking ceramic imagery celebrating the San Fernando Valley’s spirit.

“The task of the architects and myself was to transform a potentially impersonal and gloomy hole in the ground into a space that provides a pleasant adventure upon entering, feels friendly, and is relevant to a community of culturally diverse people who will use this station.”  – James Doolin

“Metaphorically, the kaleidoscopic collage images used in the murals reflect the rich diversity of indigenous and immigrant histories, aspirations, struggles and realizations of dreams. The complex design incorporates each of the distinctly different realities, while at the same time transforming them to create a whole new design, rich and dynamic in its composition.”  – Anne Marie Karlsen

“We researched the area’s history, talked with members of founding families and also with newcomers. We met with community leaders and everyday folk. It became clear that a constant in this area of rapid population change is our dreams. We dream of the past, and we dream of the future. Our memories, our dreams, and our goals keep us all going. After much research and many meetings, we knew we had finally found our station’s conceptual theme—The California Dream.”  – Virginia Tanzmann & Carl Davis

THE TANZMANN ASSOCIATES projects include facilities for Metro, LA Mission, Southern California Gas Company, LA Convention Center, and the Metropolitan Water District. Principal architect Virginia Tanzmann has led architectural teams on over 25 transit projects, including six Metro A Line (Blue) stations. Carl Davis, lead designer and project manager for the station, is also an artist and writer, and was Chairman and Design Critic for LA Architect magazine. The Tanzmann Associates has been the recipient of numerous awards.

JAMES DOOLIN was educated at Philadelphia University of the Arts and at UCLA. He has created large landscape paintings about Southern California for over 20 years. Doolin’s work is represented in many public and corporate collections and is reproduced in numerous books on America. He has received a Guggenheim Fellowship and three NEA grants.

ANNE MARIE KARLSEN received a B.F.A. from Michigan State University and an M.F.A. from the University of Wisconsin. Her work has been featured in exhibitions throughout the United States including the Museum of Fine Arts in Boston, the UCLA Armand Hammer Museum in Los Angeles, the Brooklyn Museum in New York, and the Carnegie Institute Museum of Art in Pittsburgh. Karlsen has completed numerous commissions for libraries, transit stations, cruise lines and municipal buildings. Her public art projects have been recognized as some of the most successful in the United States by the Americans for the Arts Year in Review. Karlsen received the Westside Prize by the Westside Urban Forum for her work on the Santa Monica Boulevard Master Plan for the City of West Hollywood. She teaches at Santa Monica College.