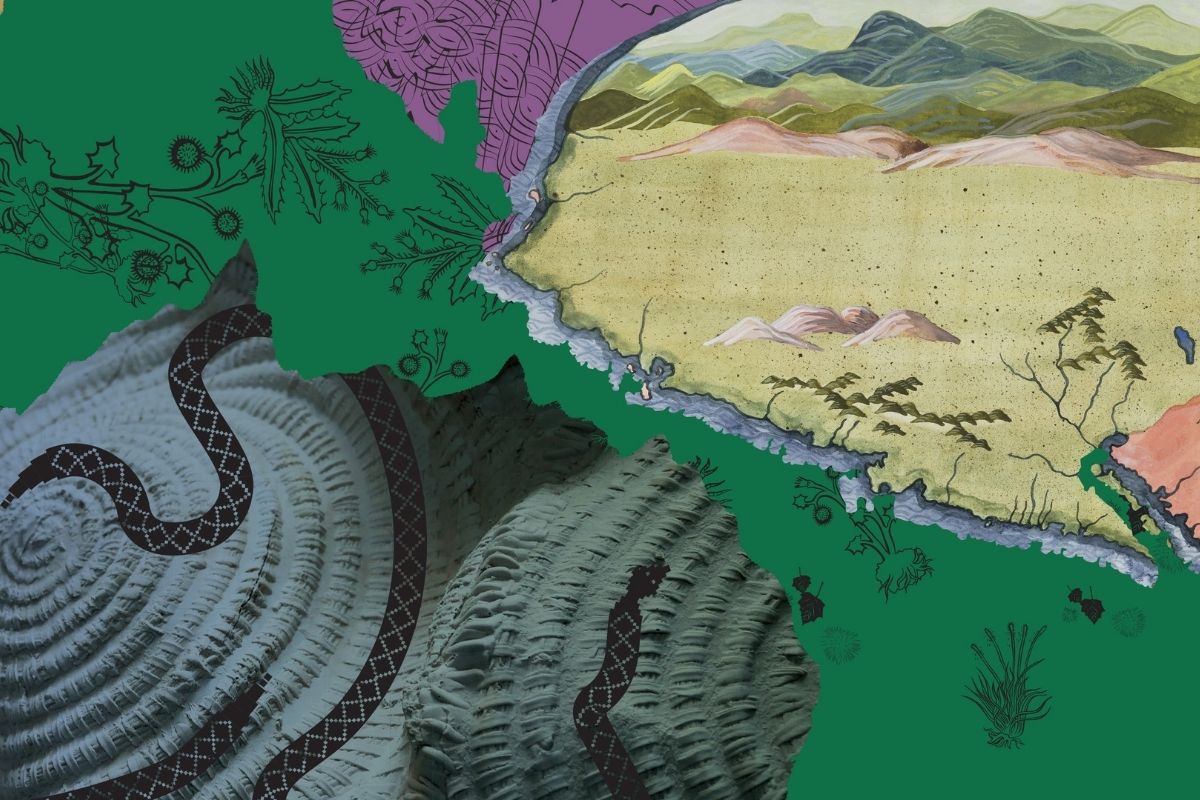 Mariana Castillo Deball‘s artwork for future Wilshire/La Cienega Station is comprised of four landscape images integrated into two collages that run along the north and south walls of the station concourse. The base of the collage are paper cut outlines from historical maps of the Pacific Coast and the American Continent. Each layer represents a specific geographic location and was created utilizing a unique technique.

The final creation weaves together four landscape images: Fossil Ground, ink rubbings made from fossils excavated at the construction site of the station as well as other fossils from the same period; Woven Cienega, a plaster interpretation of the historic Rancho La Cienega topography with an imprint of a basket pattern similar to weaving techniques created by Indigenous persons of the region; Urban Desert Fauna, an abstraction of the river transformed into an urban path that runs through the vista and includes drawings of animal species native to the region; and Medicinal Flora, ink drawings of indigenous medicinal plants.

“The spectator can observe that each field has been partially eclipsed by another image, giving space for the imagination to wander and explore.”

MARIANA CASTILLO DEBALL (b. 1975, Mexico City) is a visual artist whose multidisciplinary practice explores the history of cultural objects and the varied ways artifacts have been interpreted through archaeology and understood across time; her interest in collaborative knowledge creation often leads her to work with experts in science and culture. Deball earned a Bachelor of Fine Arts from the Universidad Nacional Autónoma de México in 1997 and completed a postgraduate program at Jan van Eyck Academie in the Netherlands in 2003. She has participated in major exhibitions in Europe and the Americas, including the Bienal de São Paulo, Berlin Biennale, dOCUMENTA (13), Kassel and the Venice Biennale. Her recent solo exhibitions include Contemporary University Museum, Mexico city, Museum für Gegenwartskunst Siegen, Modern Art Oxford, Monash University Museum of Art, the New Museum and at the San Francisco Art Institute. Deball is a professor of sculpture at Münster Academy of Art, an appointment she has held since 2015, and is a recipient of the Nationalgalerie Prize (2013) Zurich Art Prize (2012) and Ars Viva Award (2009).