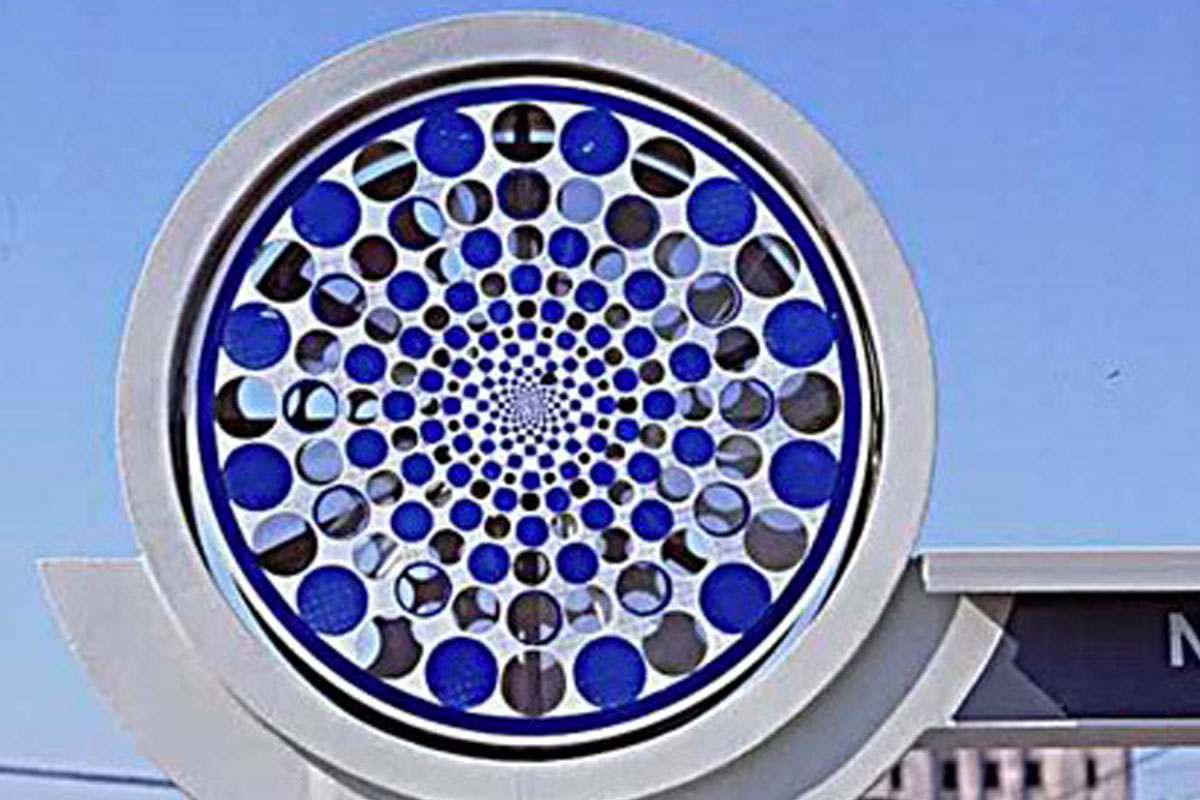 Paul Tzanetopoulos has long been fascinated by the seemingly infinite variety of pattern in cultural artifacts, often evident in textile designs. In this project, Breezy and Delightful, the artist focuses on designs which reflect the unique cultural heritage of the many groups that live and work in Long Beach. These textile designs—ranging from patterns taken from Cambodian shadow puppets to modern graphic geometry—are transformed into rotating, wind-driven kinetic sculptures mounted in the pylons on the station platform. Each pair of these counter-rotating disks are also perforated with graphic patterns to allow the passage of sea breeze and sunlight to animate the designs and the shadows cast on the platform.

The cut-out graphic patterns were merged from an ongoing body of Tzanetopoulos’ work based on Marcel Duchamp’s Roto Series which employs graphic elements and illusions of 3-dimensional and conceptual structures which were designed to rotate in order to illustrate these concepts. This ongoing series is a large-scale, interactive installation for which a graphic CD reader was developed in order to musically describe Duchamp’s series, as well as this artist’s and other graphics.

“The title, ‘Breezy and Delightful,’ was captured from early publicity for the City of Long Beach, illustrating its position on the California coast—its pleasant weather and cheerful attitude. I thought that this phrase reflected both the City and the site of this station. On each of my frequent visits to the station it has been a beautiful, breezy and pleasant day.”

PAUL TZANETOPOULOS was born in Athens, Greece. As a child, his father encouraged his interest and respect for the Greek heritage in architecture and the arts. He received his Bachelor of Arts from the University of Nevada, Las Vegas and his Master of Fine Arts from UC Irvine. He has been a working, exhibiting artist since the 1960s. His work is conceptually driven inter-media art, typically large-scale and often interactive. His work is included in the permanent collection of the LA County Museum of Art. He has produced many public art works for the cities of Los Angeles, Long Beach, West Hollywood, Northridge, Arcadia, Montebello and La Quinta, California.