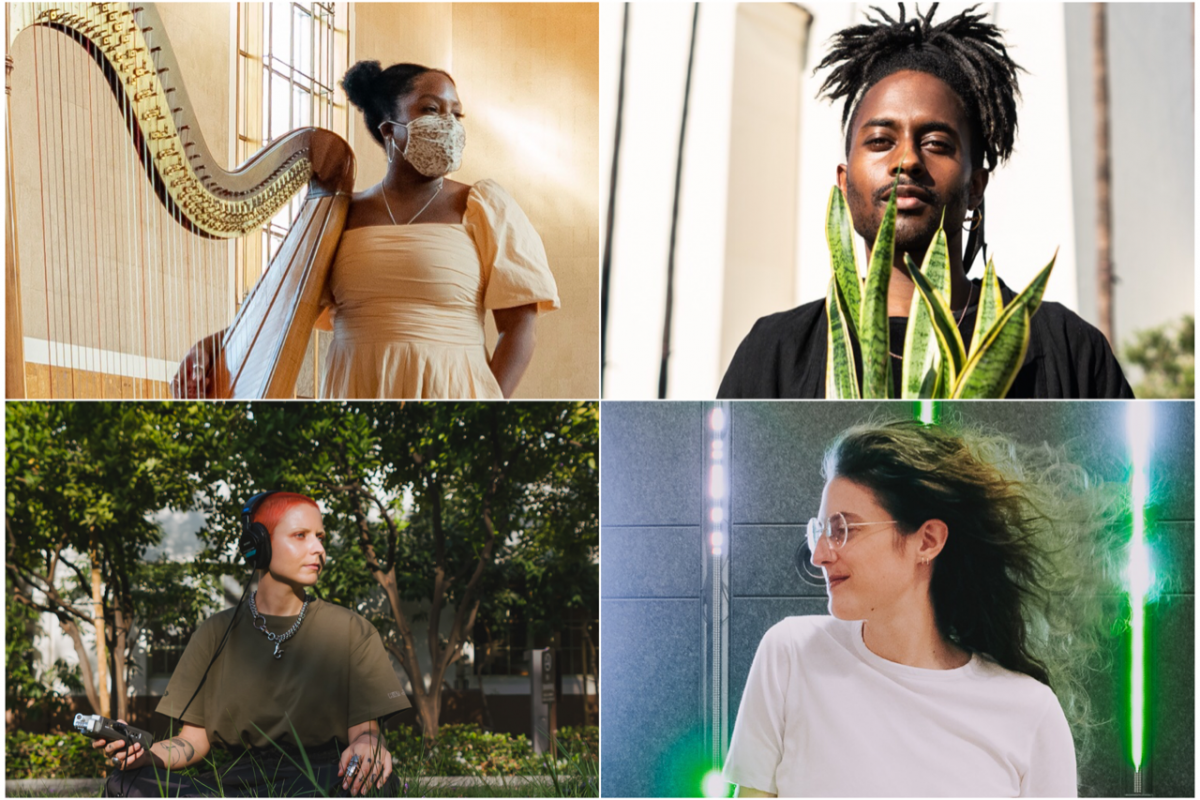 Metro Art Presents, in collaboration with LA-based Leaving Records, continues its series of soundscapes for transit riders in 2021 with three more this summer and culminating in an intimate, outdoor live event on Saturday, August 28 from 4:30pm-sunset featuring the four artists on the Union Station North Patio.

Listen to An Environmental Music Series from Metro Art and Leaving Records soundscapes:

Join us for listen to music outside in the daylight at union station on Saturday, August 28. Walk ups also welcomed on a first-come, first-served basis.

Visit our calendar for all event details and guidelines.

NAILAH HUNTER is a multi-instrumentalist and composer from Los Angeles. She combines harp, synth, found sounds, and voice to create reflective sonic landscapes that promote healing and self-awareness for herself and the listener. Her ambient music conjures unique sonic locations forged by imagination, drawing listeners into a tranquil world of rest, contemplation and color. Her recent releases include Bassin Bleu (Mexican Summer), Spells (Leaving Records), and Black Valhalla created to support the Loveland Foundation.

THE GROWTH ETERNAL (TGE) was started in 2018 as a project stemming from artist Byron Crenshaw’s direct experience and interest in bringing together disparate parts of the self. Crenshaw is a Tulsa-born, Dallas-taught, Black-living, spiritual being who currently lives in Koreatown. He started playing music professionally at 15 years old when he fell in love with jazz after hearing John Coltrane and Duke Ellington’s rendition of “In a Sentimental Mood.” After attending the University of North Texas and graduating in 2019 with a Jazz Bass Degree, he decided to move to California to pursue a more honest and creative path for himself in music. Eternally he grows, learning as he goes.

GREEN-HOUSE is the project of Los Angeles based artist Olive Ardizoni. Approaching their music with an intentional naivety, they craft songs that find freedom through simplicity. As a non-binary artist, they hope to create a space with fewer barriers as both a performer and a listener. Green-House’s latest full-length album Music For Living Spaces was released in May of this year. The record is an extension of their desire to encourage people to connect with their existing surroundings.

CELIA HOLLANDER is a Los Angeles based composer and artist working with audio, scores, performance, installation and text. Her work critically engages ways that audio and the act of listening can shape temporal perception, generate narratives, question cultural infrastructures and cultivate social connection. Her work has been performed or installed at institutions and venues including MOCA, The Getty, Skirball Cultural Art Center, Various Small Fires, Human Resources and Zebulon. Her discography includes releases on Leaving Records, Recital and Noumenal Loom and she is a resident dj on Dublab Radio. She holds an MFA from California Institute of the Arts where she studied music composition.