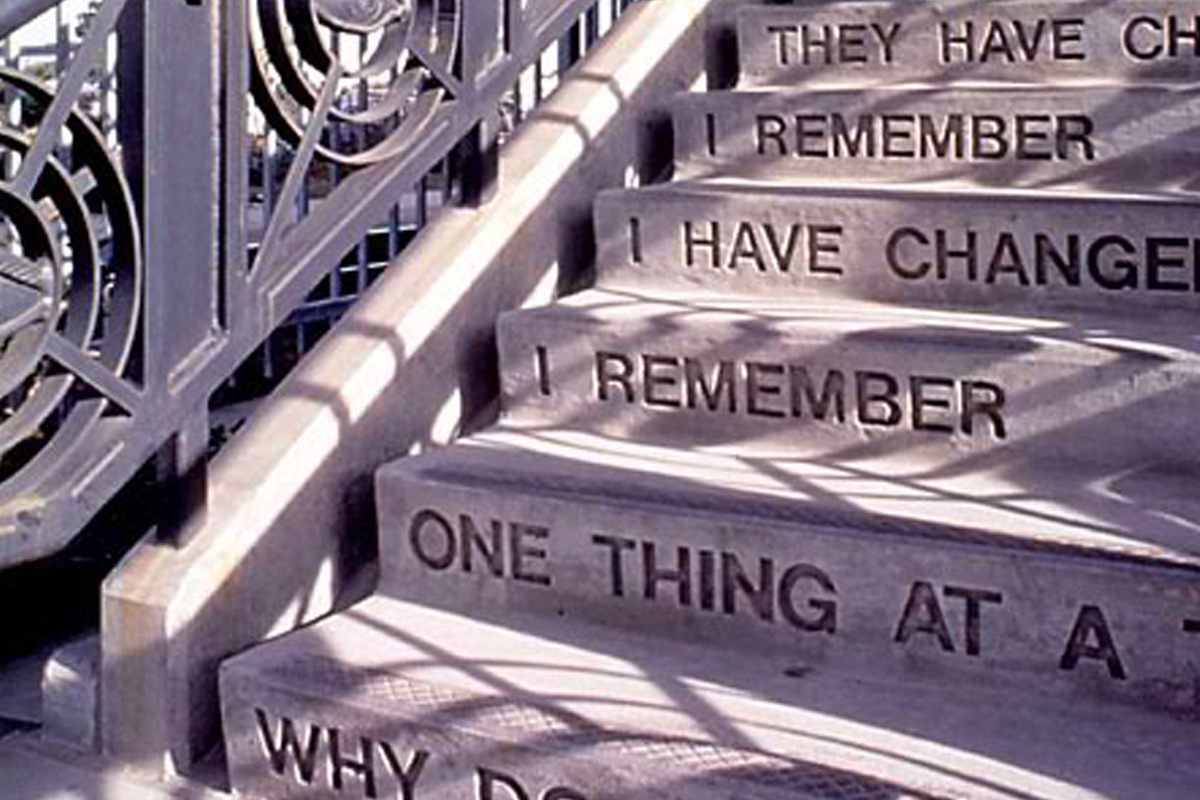 Renée Petropoulos explores the notion of a location’s identifying landmarks. In this station, large vibrantly-colored medallions, or shields, reflect the neighborhood’s industrial landscape and complex machinery, and transform the station into a bold landmark. A sculptural air-ventilator tower circles above the station while the girders supporting the canopy resemble crisscrossing electrical towers. Benches are reminiscent of industrial tools and gears.

Passengers can explore the idea of location as they are engulfed by conjugations of the verb “to be”; subtle area maps incorporated into the station platform and stairwells include the names of people who worked on the station’s construction. At the plaza level, a complex and colorful terrazzo paving pattern greets passengers. Fragments of private conversations are embossed into the concrete stair risers, interjecting the intimacy of private space into this very public location. The act of viewing is conceptualized throughout the station: handrails house eyes, silkscreened on the elevator glass frames both the viewer and the landscape, and viewing tubes locate various landmarks in the area while simultaneously allowing passengers to focus in on one another.

This project was funded in part by Continental Development Corporation. It was also designed in collaboration with Escudero-Fribourg, Architects.

“People who use this station are daily commuters who work in this area. I wanted the various aspects of this station to reveal themselves over time, for the station to be experienced as a giant art piece in which the understanding of the whole is reached through daily encounters with each of its elements. I chose to focus on the idea of location—places that identify you in terms of where you are in the city, in the country, in the world—including psychological location. I wanted to pose some questions about monuments or markers as identifiers, including seeing the station as a possible landmark.”

ESCUDERO-FRIBOURG ARCHITECTS was established in 1972 and has designed six Metro Rail Stations as well as a number of institutional/health care and educational facilities.

RENÉE PETROPOULOS, born in Los Angeles, holds a fine arts degree from UCLA and lives and works in Venice, California. Petropoulos is a painter whose work has become increasingly three-dimensional, reflecting an interest in decorative forms and images of different cultures. Heavily influenced by street art, her works often involve several layers of painted imagery. Her public art commissions include a large painted ceiling at the downtown Los Angeles Public Library, a series of sculptures in Culver City, and a collaborative project for the Municipal Services Building in downtown Philadelphia.