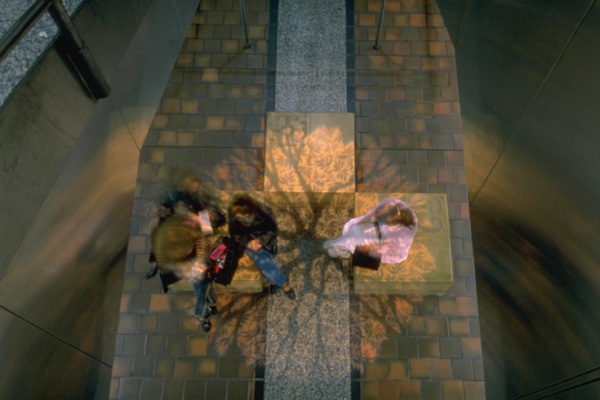 The artist team has created seating environments that produce a strong visual and functional experience for Metro riders. The artist team was strongly influenced by the interior of the Fine Arts Building, located directly above the 7th/Metro Center Station. The lobby of the Fine Arts building features the tilework of Ernest A. Batchelder, an important figure of the arts and crafts movement. Batchelder incorporated botanical forms as adornment in his tilework, often referencing nature as symbolic shapes. The artist team incorporated patterned organic forms onto their seating design.

Durable lightweight concrete seats made up of 3’x 3’ squares, are subdivided into 18” by 18” cubes. These 3’ by 3’ cubes are arranged to produce a branching ‘Y’ pattern suggestive of plants and trees. The seats are influenced by Froebel kindergarten materials, whose process is based on primary forms that relate to one another in a fixed proportional ratio. Etched or cast in low relief on the tops of the seating cubes are shapes influenced from those that exist in the tilework of the Fine Arts Building. Using lighting elements from above (architectural ellipse features), the effect is a series of projected foliage patterns within the seating area.

KIPP KOBAYASHI, MFA is an artist and designer whose experience in the field of environmental design includes five years at Walt Disney Imagineering and seven years as a partner at Mythograph. His projects include design commissions for Kaiser Permanente.

NOEL KORTEN is an artist and curator. He has completed public art projects with the City of Carlsbad and Amtrak. He served as Director of Exhibitions at the Los Angeles Municipal Art Gallery from 1994 to 2005.

MARTA PERLAS, AIA is an architect and designer whose accomplishments over the past fifteen years include many significant civic and institutional projects, including the Ontario Center View Corridor in Ontario, California and the Calexico New Port of Entry in Imperial County, California