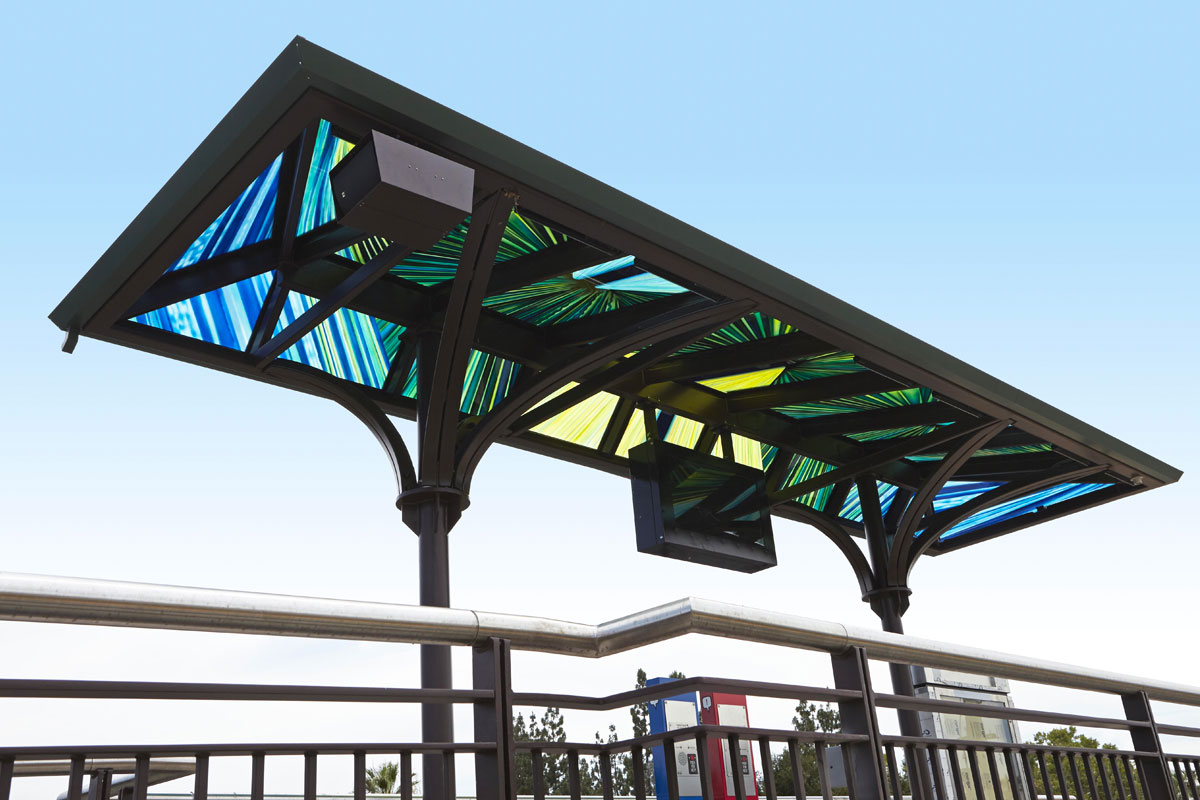 Lynn Goodpasture’s artwork for this station celebrates the area’s botanical heritage and the individuals who have shaped the surrounding landscape. Titled Azusa Horticultural Paradise (2015), it includes a 28-foot-long hand-painted glass canopy, four custom-cast, mosaic-clad benches on the platform and sandblasted floral designs in the adjacent parking structure’s concrete paving. The palm frond imagery on the canopy recalls the majestic California fan palms along nearby Palm Drive, which are thought to have been planted in 1899 and have become a symbol of Azusa. The palm tree reference is also articulated in mosaic on the sides of the platform benches. The mosaics installed in the bench seats each portray natural elements that are historically linked to the location: honeybees and oranges imported by Henry Dalton, who first developed the site in the mid-19th century and launched the local citrus industry; the indigenous western sycamore and wild hyacinth that are namesakes of ranches once on the property, inherited by sisters Kate Slauson Vosburg and Louise Slauson MacNeil who established the Azusa-Foothill Citrus Company in 1902; and a popular camellia flower called Rosedale’s Beauty that was propagated by nearby Monrovia Nursery during the 1950s.

“At different times and under differing names, this site has been the foundation of one of the earliest, productive and innovative California Ranchos; one of the most successful and well-known citrus companies; and the world’s leading grower of landscape and garden plants.”

LYNN GOODPASTURE (b. 1950, Montclair, New Jersey) attended the Corcoran School of the Arts and Design and participated in a residency at the Athens School of Fine Arts. She has taught at the Smithsonian’s Cooper Hewitt Museum. Goodpasture creates large-scale art, often exploring the natural world, for public and private spaces. Among her numerous commissions are site-specific artworks fabricated in glass, mosaic, metal, stone and tile for exterior and interior environments at schools, hospitals, libraries, transportation centers, public gardens, and private homes throughout the United States.