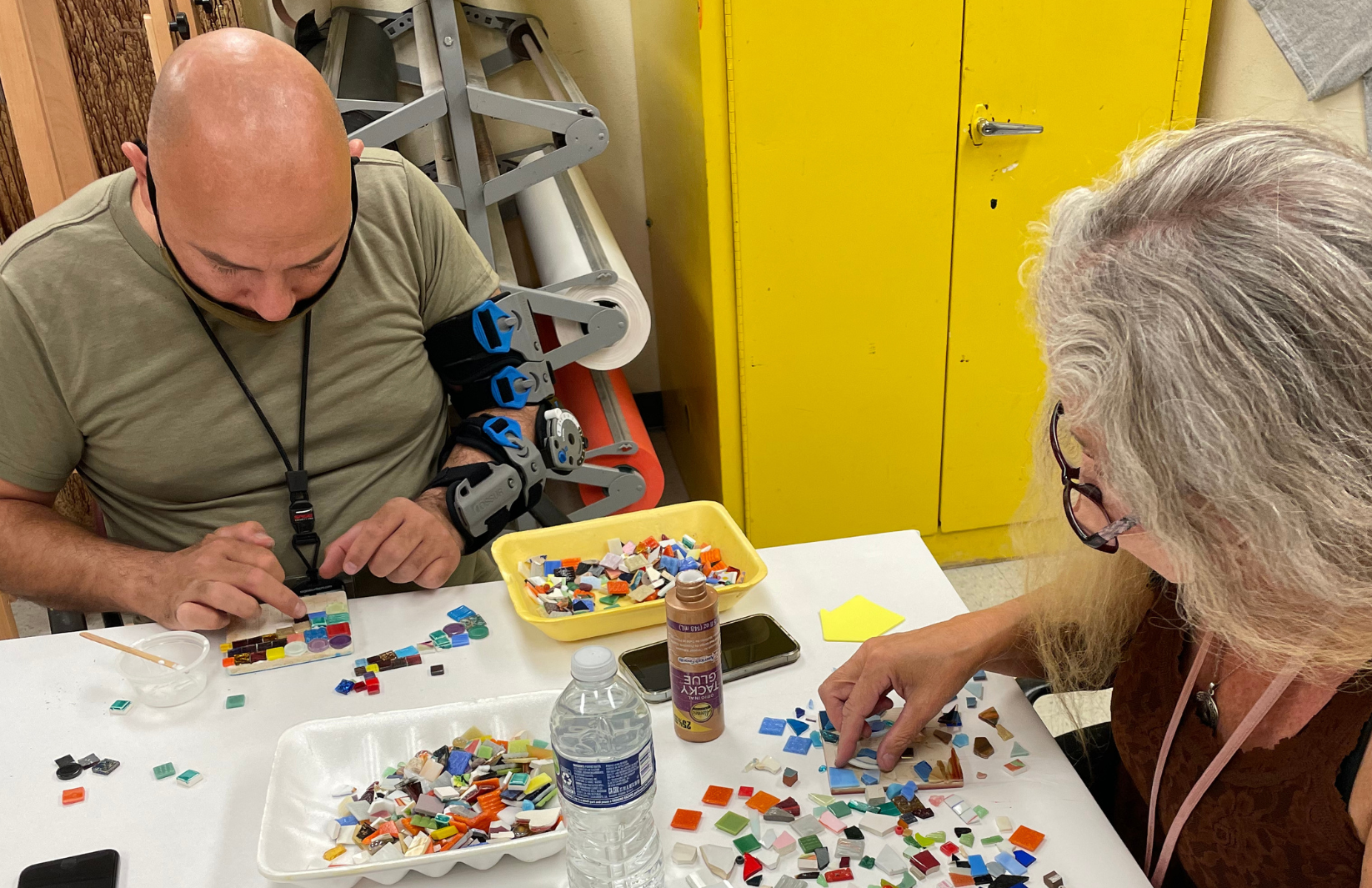 “This project is important for preservation of historical events and artwork. It is continuing the legacy that was created by Peter Stewart and honors his work and our Veterans. The future artwork will be an updated homage that will allow it to live on for many more years in mosaic form.”  –  US Army Veteran, Veterans Legacy Art Project Panelist

Through a series of empowering and expressive hands-on mosaic workshops, Los Angeles-based arts organization Piece by Piece is engaging the veteran community in the design of a mosaic artwork for a freestanding wall adjacent to the future Westwood/VA Station.

The mosaic artwork honors a section of the 1995 National Veterans Mural by artist and US Navy veteran Peter Stewart. This section of the mural, which cannot be relocated due to the age and condition of the wall, will be decommissioned for the construction of the new Metro station plaza. The majority of the over 23,000-square-foot mural will be protected and remain in place during and after the station’s construction. 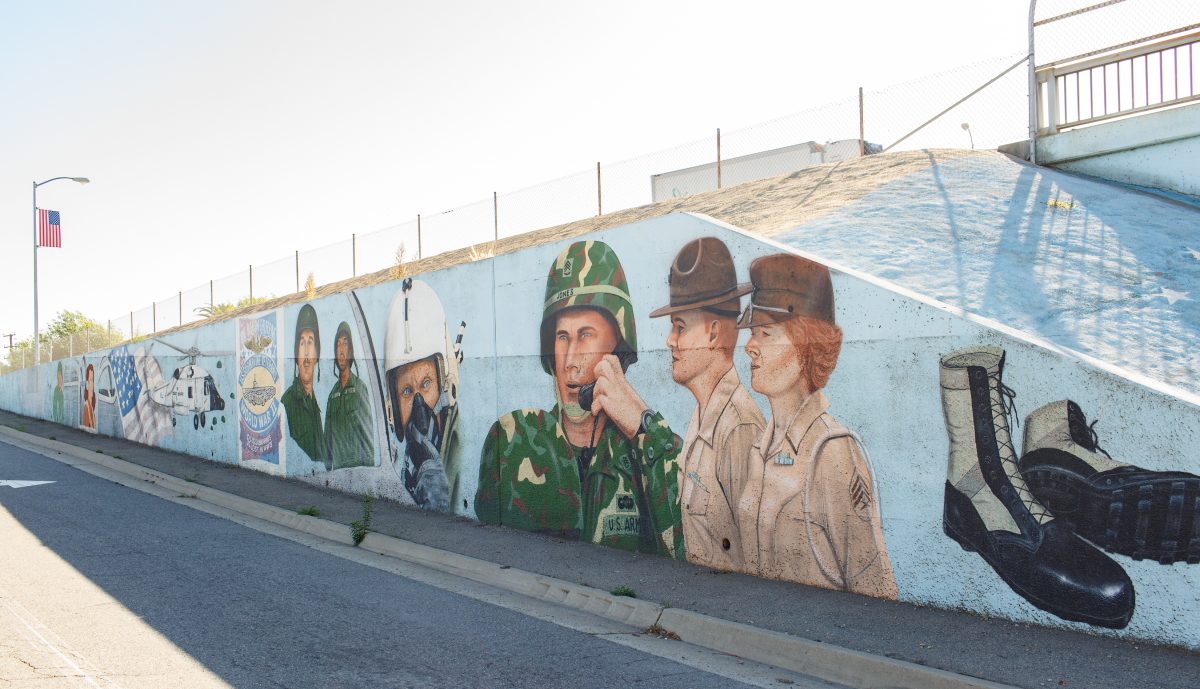 The impacted section of the mural is located on the off-ramp from westbound Wilshire Bl. to Bonsall Av.

Once fabricated, the new mosaic artwork designed with veterans through the Piece by Piece workshops will be installed on the north side of the offramp, directly across the street from the original site of the mural. It will be a lasting testament to the work of Peter Stewart and the many veteran volunteers who painted the mural. The Veterans Legacy Art Project continues the healing power of art for veterans.

“I believe Peter would be amazed and pleased that he and his work are being remembered and honored in such a meaningful way, all these years later.” – Patricia Bobik Sezna, assistant to Peter Stewart on the National Veterans Mural

The veteran community is invited to join Piece by Piece for ongoing creative workshops to participate in the design of the mosaic artwork. Four upcoming workshops will take place in January 2023 (1/24 and 1/31) on Tuesdays from 11am-1pm  at the Bandini Heroes Golf Course. To learn about how to participate, call (213) 459-1420 or email workshop coordinator Jadie Delgado of Piece by Piece at jadie@piecebypiece.org.

With over 15 years of community experience focused on mosaic art, Piece by Piece was selected by a panel of visual arts professionals and veteran representatives to design the mosaic artwork for the Veterans Legacy Art Project. Piece by Piece works with people who have experienced homelessness or are living with economic insecurity—including the veteran community. 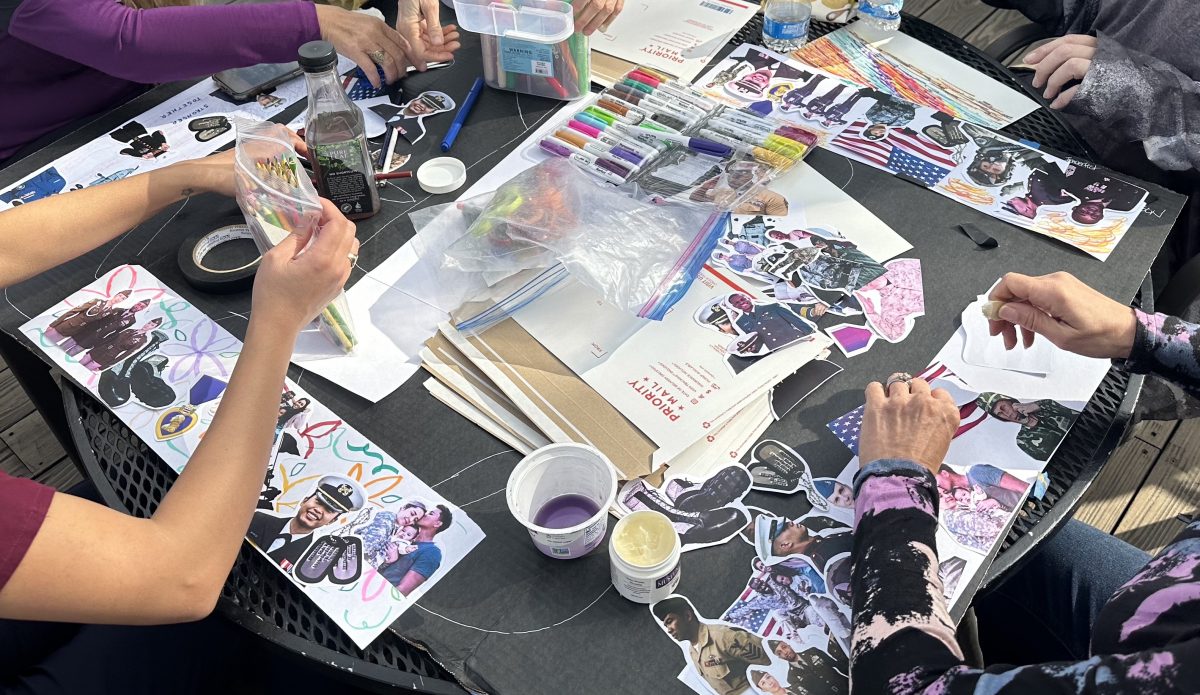 Materials are provided by Piece by Piece at the Veterans Legacy Art Project workshops.

The organization provides specialized training in mosaic arts while developing professional skills beyond the craft. In 2008, Piece by Piece led a series of community workshops to create The Purple Heart, a mosaic mural conceived and handmade by residents of Skid Row to present to the Skid Row veteran community in honor of their service. More recently, Piece by Piece was commissioned by A Community of Friends, a non-profit developer of permanent supportive housing, to create public artwork for a new supportive housing apartment complex for homeless veterans in downtown Los Angeles. Artisans worked with residents to create a large-scale mosaic artwork for the exterior of the building as well as personal artworks for their new homes.

About the National Veterans Mural

The 1995 National Veterans Mural was painted by artist and US Navy veteran Peter Stewart. Stewart worked with volunteers and donated art materials to realize the large-scale mural in and around the intersection of Wilshire Bl. and Bonsall Av.

Shad Meshad, founder of the National Veterans Foundation (NVF) , collaborated with artist Peter Stewart on the mural. Meshad, a therapist and veterans counselor who began working with Stewart in 1989, is a fellow Vietnam veteran who reignited a passion for art in Stewart when he was suffering from PTSD, addiction and homelessness. Stewart completed several notable murals in Los Angeles, including the POW/MIA Mural in Venice in 1992, before passing away in 1995.

While a section of Stewart’s mural will be decommissioned during the construction of the Westwood/VA Hospital Station, the majority of the over 23,000-square-foot mural will remain and be protected in place during construction.

“The National Veterans Foundation understands that a section of the mural on the northeast wall may be impacted by the construction of the new Metro Westwood/VA Hospital Station. This site provides a respectful and highly visible setting facing the original location and best preserve the important legacy of the many veterans that we worked with on this project.” – Shad Meshad, president and founder, National Veterans Foundation 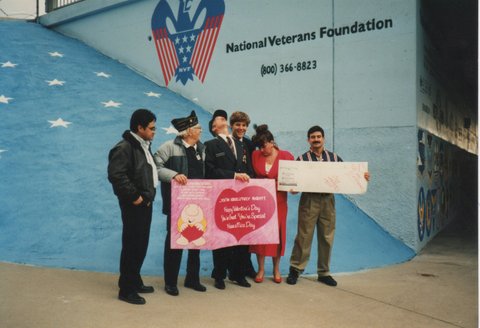 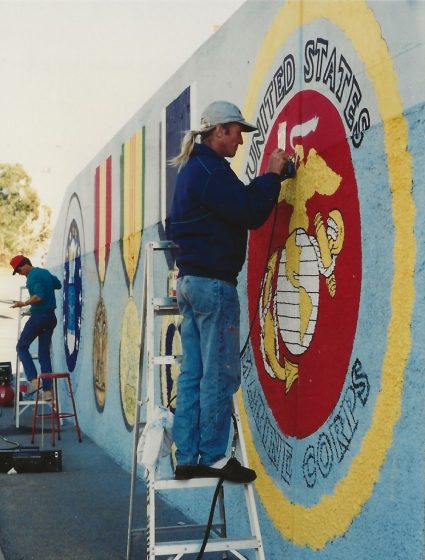 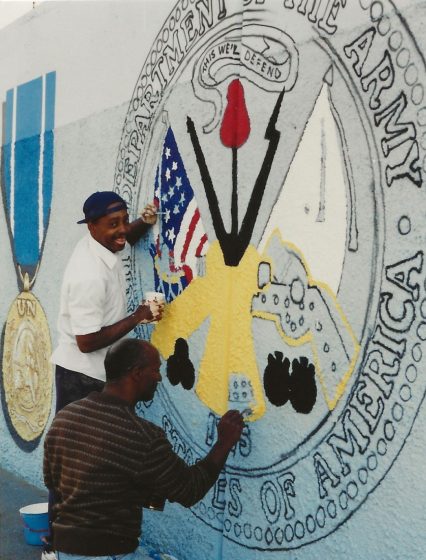 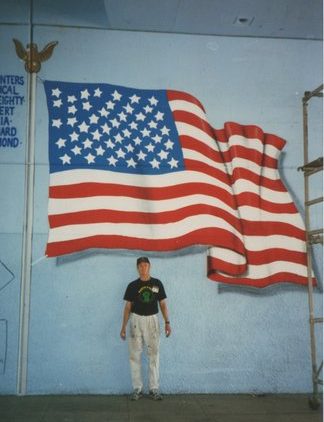 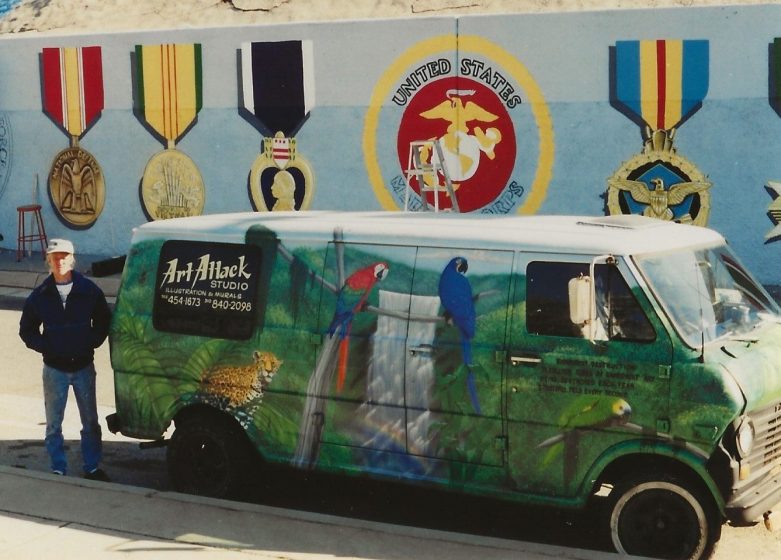 Peter Stewart with his van in front of the mural. Photo by Patrcia Bobik Sezna. 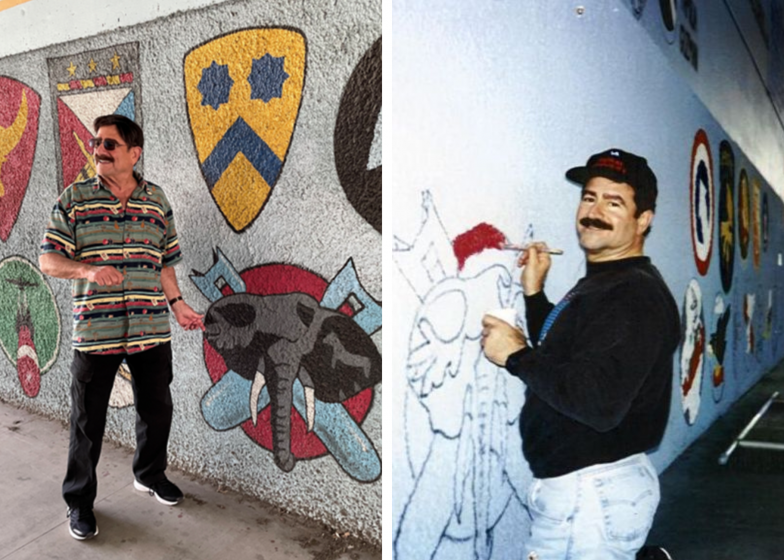 Shad Meshad of NVF visiting the National Veterans Mural in 2021 at left and working on the mural c. 1993 at right. 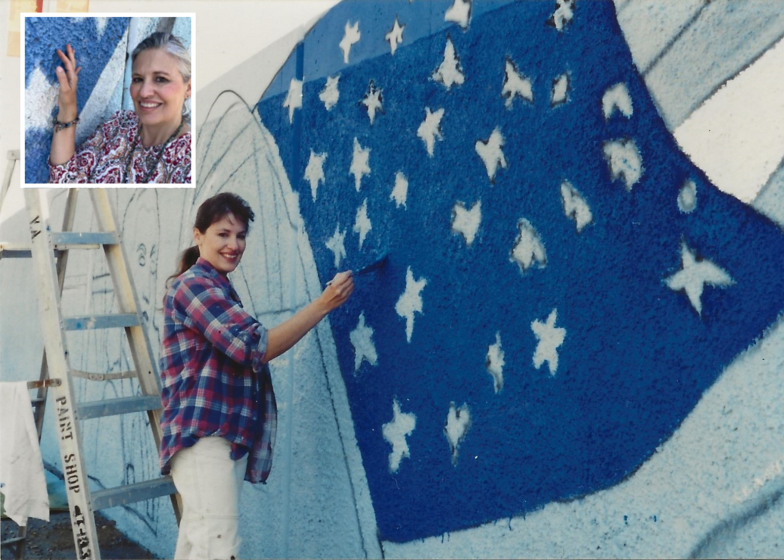 Archival photo of Patricia Bobik Sezna painting the National Veterans Mural c. 1993 with an inset of her visiting the mural in 2022. 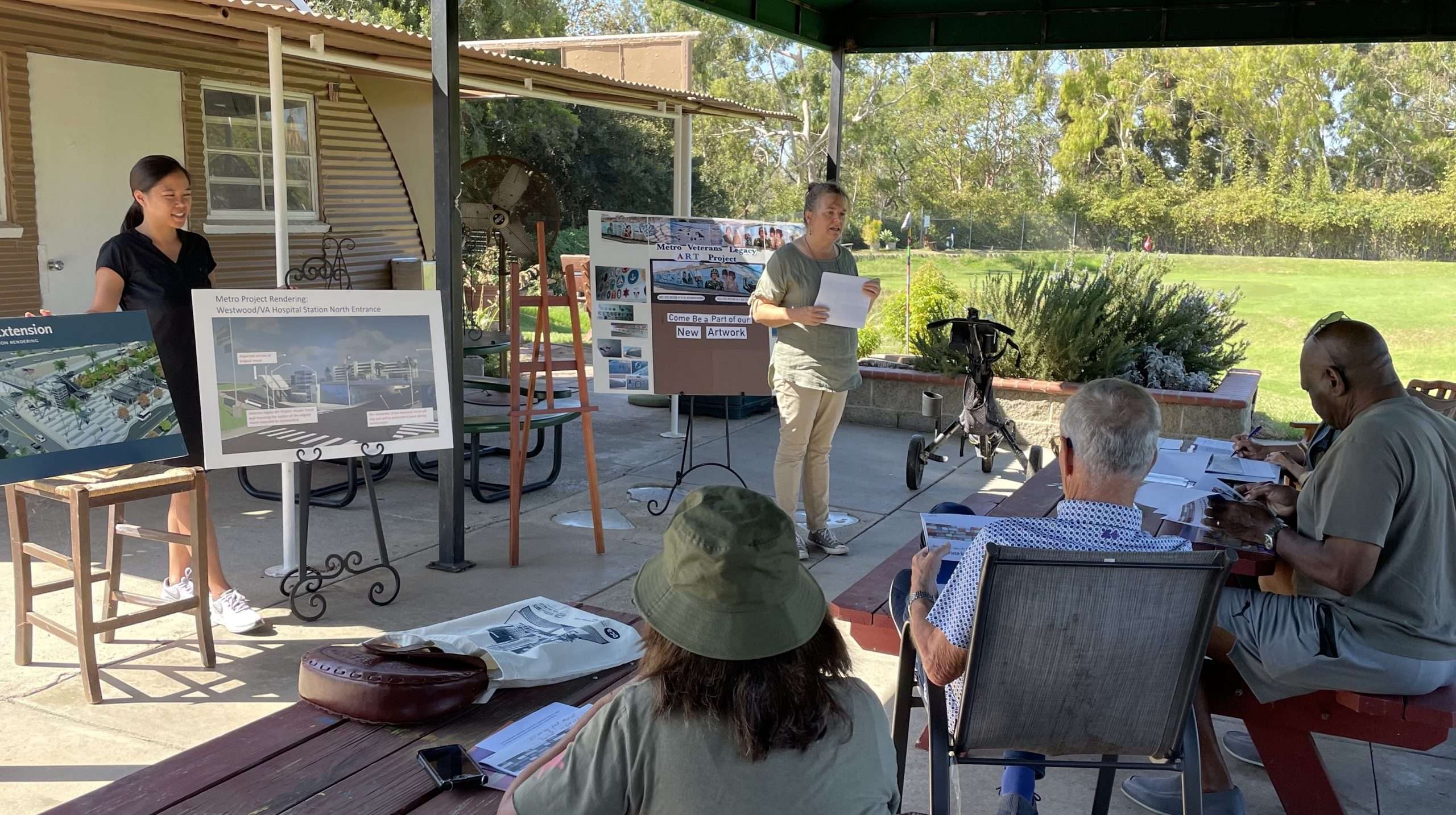 Dawn Mendelson of Piece by Piece and Glyssa Robles of Metro Construction Relations introducing veterans to the project, September 2022 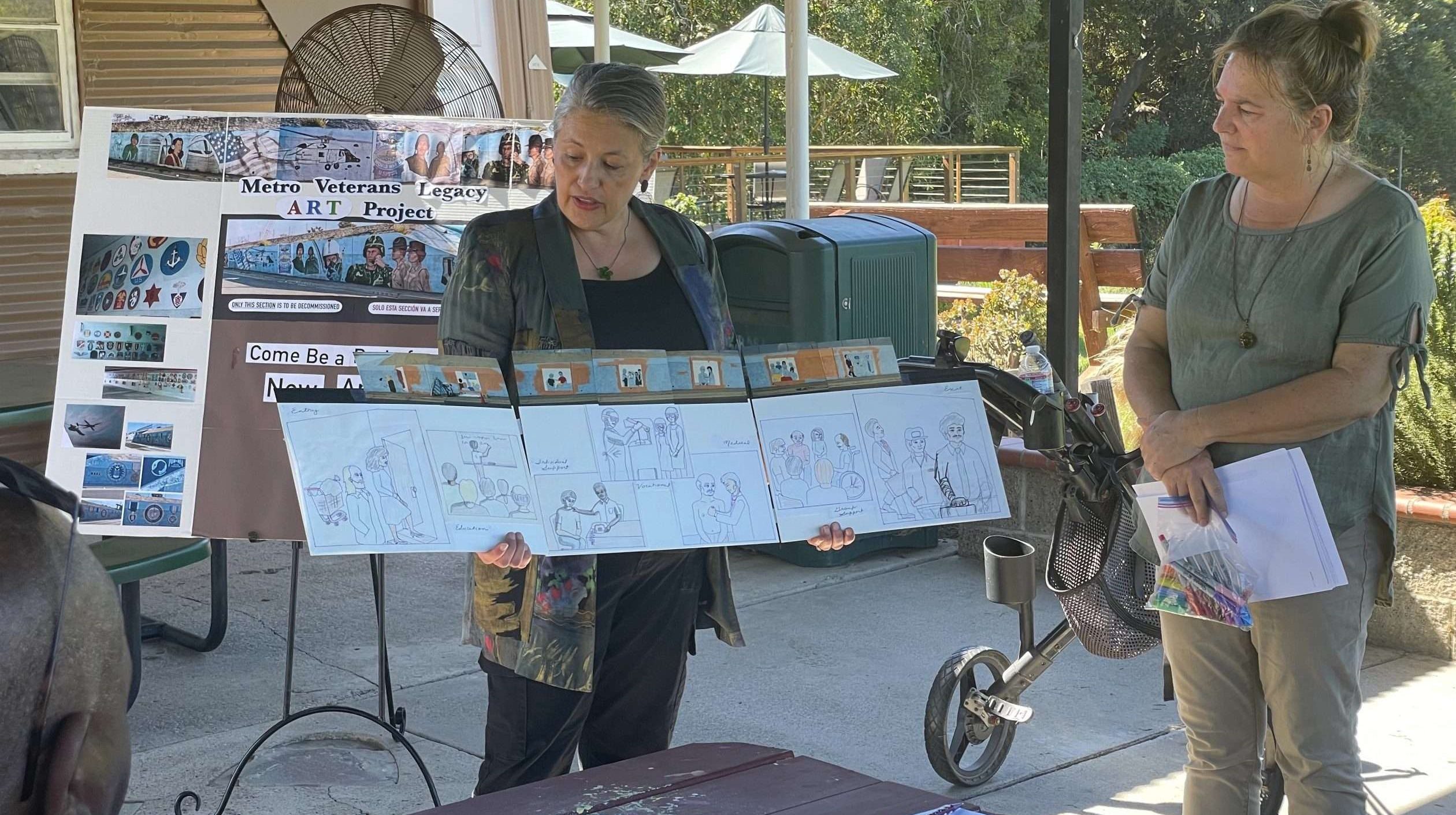 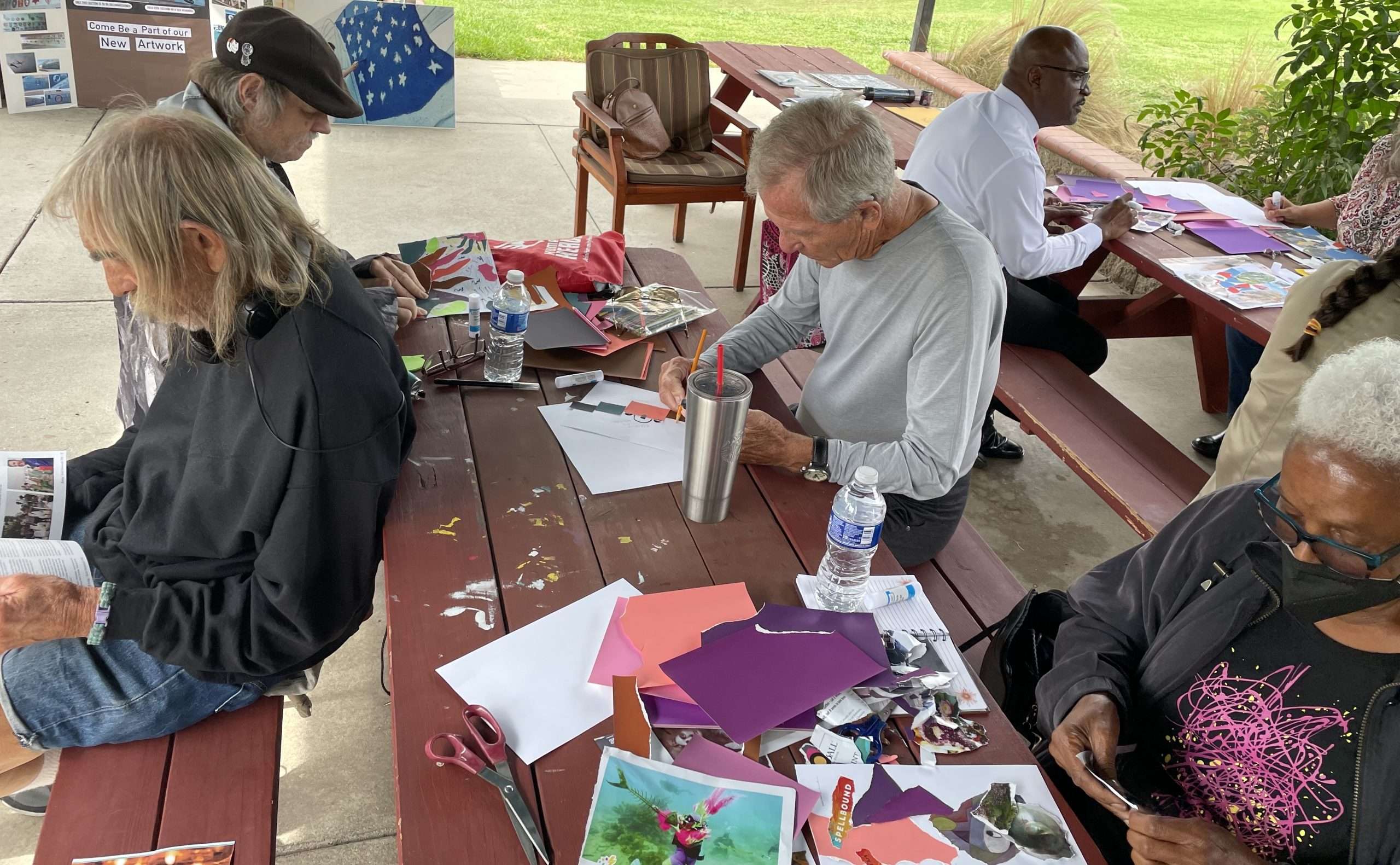 The workshops include both mosaic and collage creative explorations, October 2022 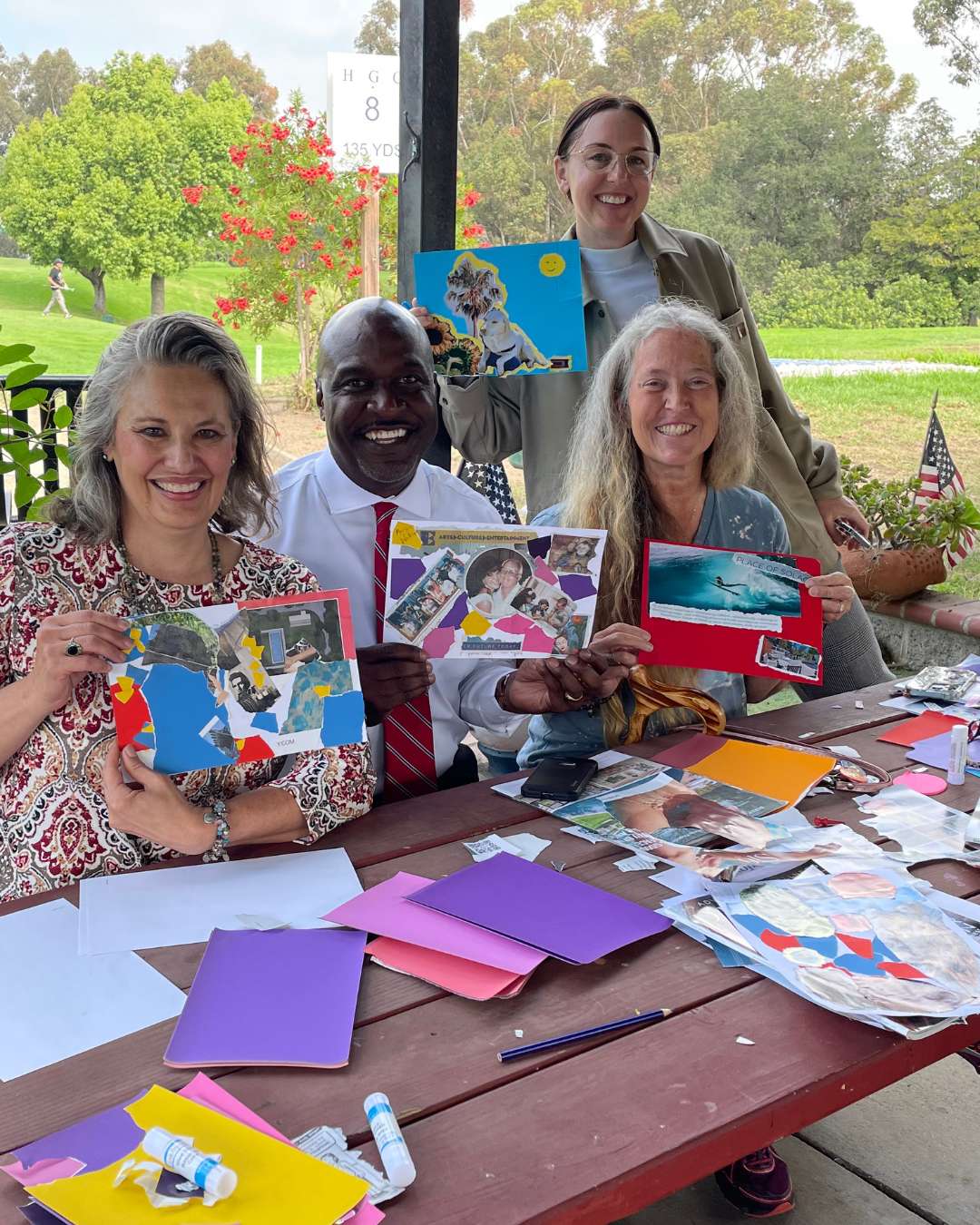 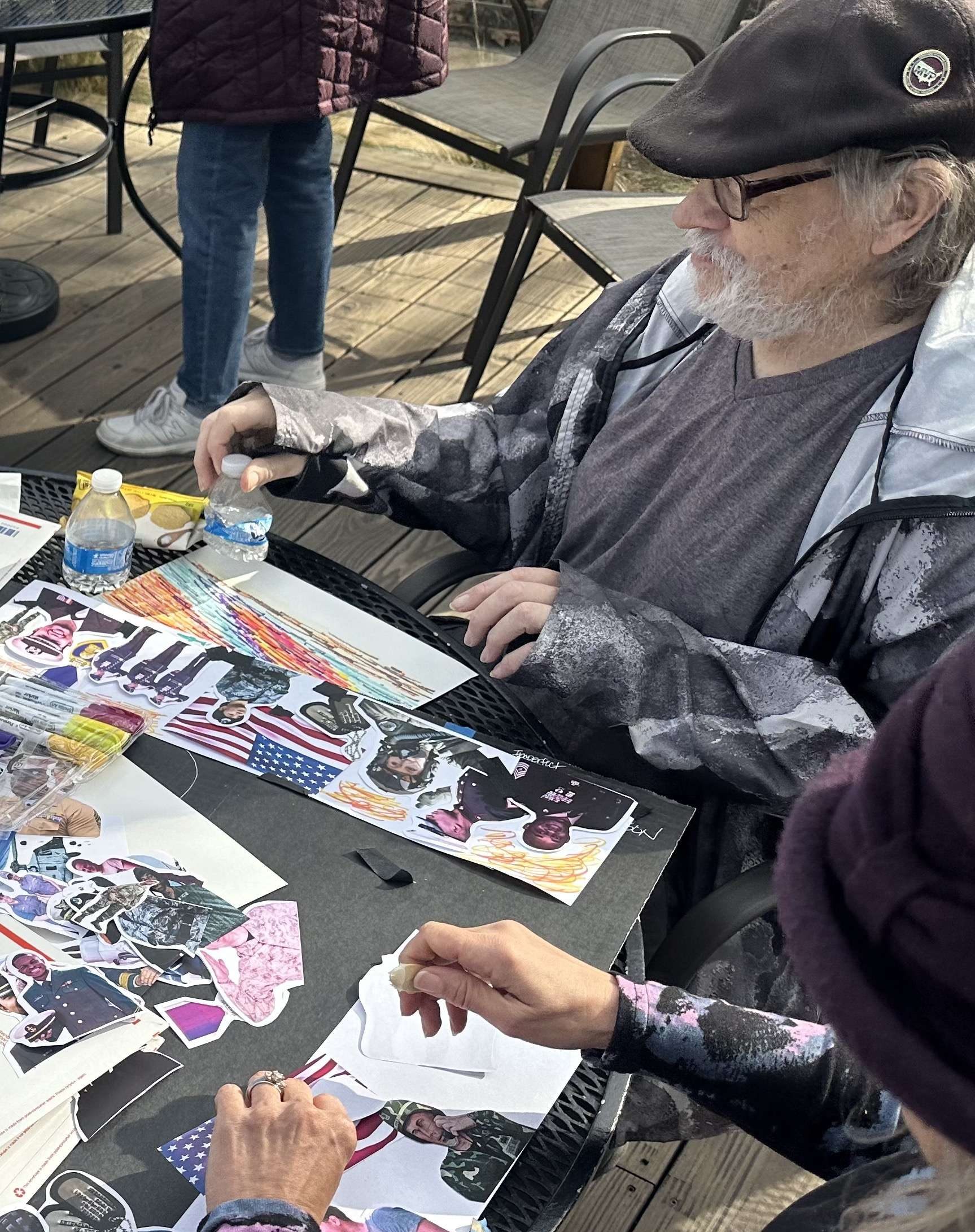 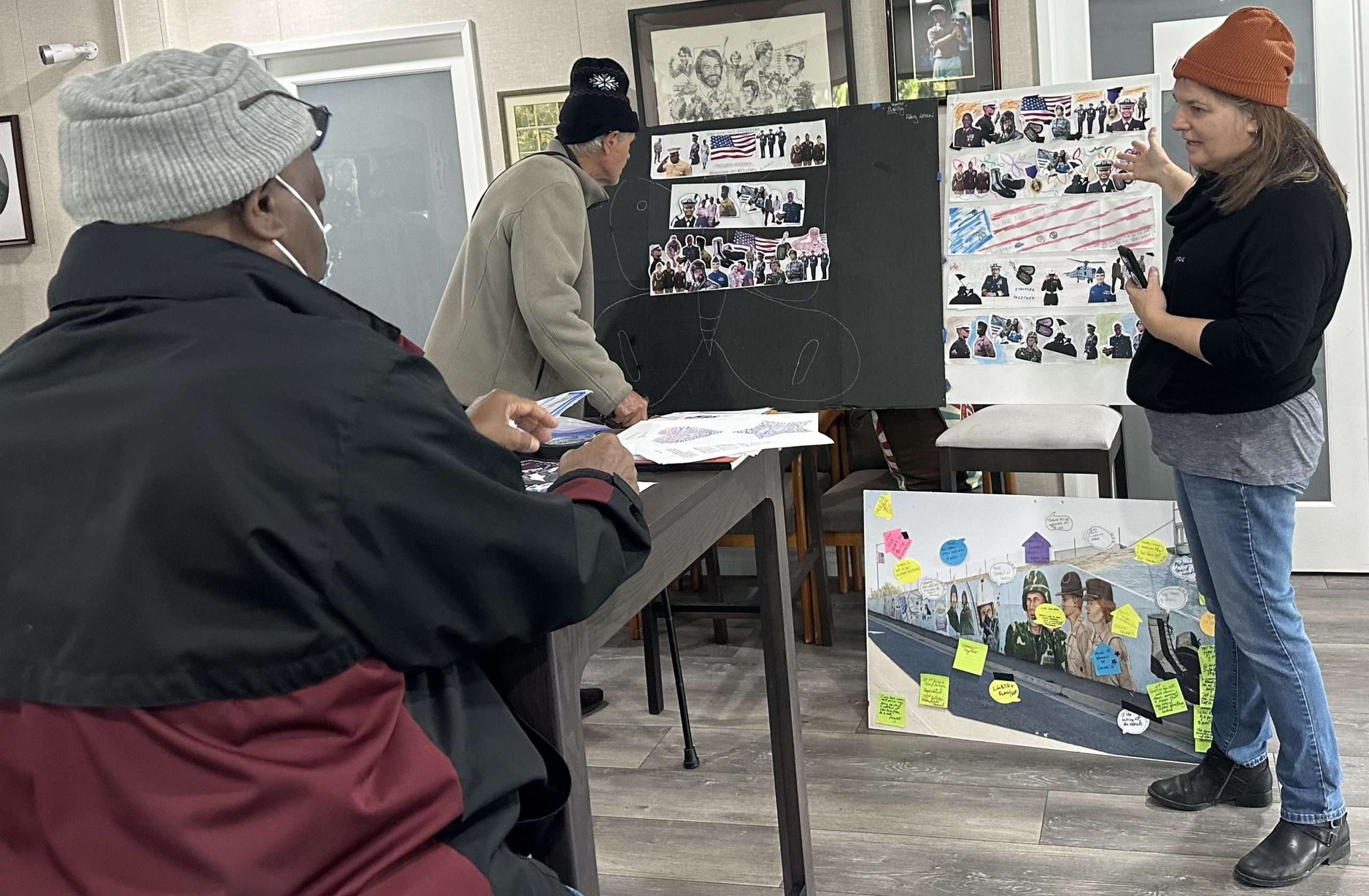 Dawn Mendelson of Piece by Piece leading a workshop, December 2022 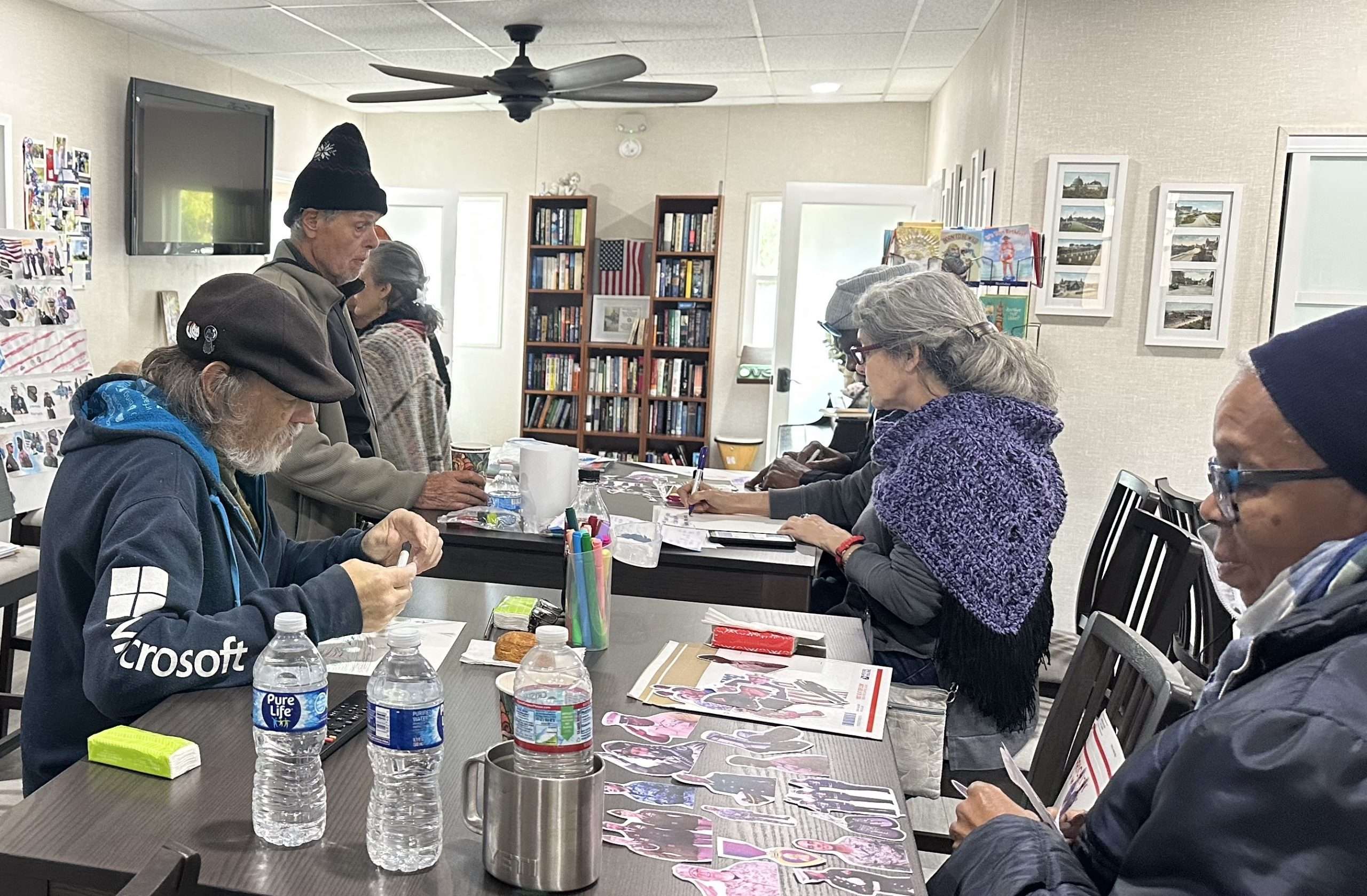