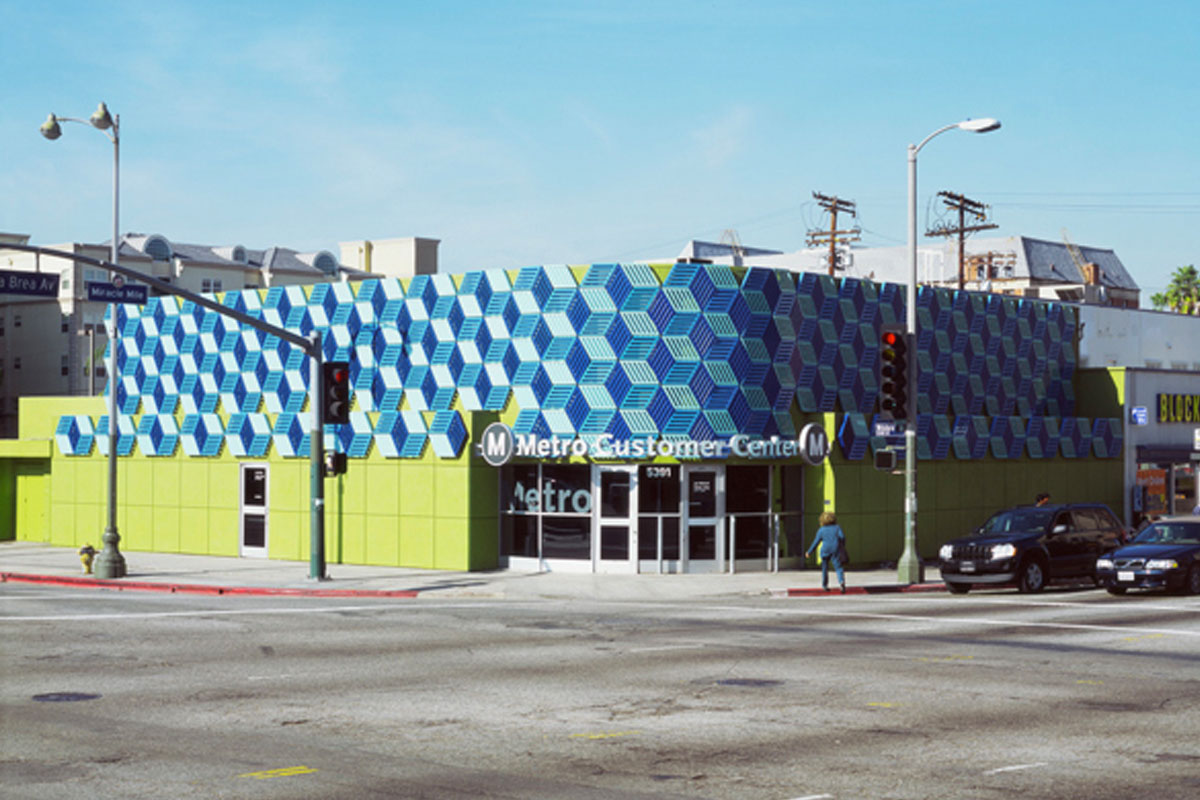 Jim Isermann’s Untitled (Tilford’s)  reimagined the facade of Metro’s former Wilshire Customer Center. The artwork transformed the existing 1950s building into a dynamic, eye-catching landmark. Located on the northwest corner of La Brea and Wilshire boulevards in Los Angeles’s Miracle Mile neighborhood, the building was originally the site of Tilford’s Restaurant and Lounge, a midcentury eatery designed by famed Los Angeles architect Welton Beckett. Metro first opened the facility as a customer center in 1987, and over the subsequent years, the exterior of the building was covered in stucco and painted gray. Isermann’s modular artwork incorporated more than 450 powder-coated aluminum panels to create a bold, geometric pattern on the top two-thirds of the building’s exterior. In tribute to the structure’s midcentury origins, the cladding was inspired by brise-soleil or sunscreens, an architectural device often used in Southern California during the 1950s and 1960s to update designs considered passé. In 2015, the artwork was deinstalled for the Metro D Line (Purple) Extension project.

“The steel module design consists of shapes with 3 orientations, each powder coated in a different blue hue, a combination of which creates an illusion of cubes in three dimensions – a building block. The monumental installation of modules do not wrap the entire building. The lower 8 feet of the building are uncovered to reveal both the stucco-fication of the Beckett design and the utility of the sun screen.”

JIM ISERMANN (b. 1955, Kenosha, Wisconsin) earned a Bachelor of Fine Arts from the University of Wisconsin–Milwaukee and a Master of Fine Arts from California Institute of the Arts. His work has been exhibited extensively in the United States and Europe and is held in the permanent collections of the Los Angeles County Museum of Art, the Museum of Contemporary Art, Chicago, and the Museum of Modern Art, among others. Isermann has been awarded grants from Art Matters, the California Community Foundation, the John Simon Guggenheim Memorial Foundation and the National Endowment for the Arts. He has completed public commissions for the Dallas Cowboys stadium in Texas, Ohio State University and Princeton University, to name a few.