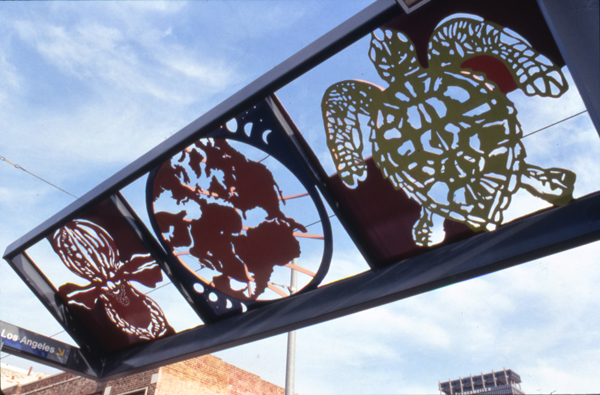 Brailsford’s Time and Presence at Pico Station examines the disparity between human scale and the vastness of the earth and the cosmos. Two twenty-foot steel canopies were plasma-cut with images of the earth and the solar system. Each of the colorful panels casts changing patterns of light and shadow on people waiting, the platform pavement, and passing trains.

The central image of Brailsford’s north canopy is the solar system, flanked by two triangular forms that represent the mathematical symbols for “less than” and “greater than” and allude to the expanding and contracting universe.

Brailsford’s south canopy presents a triptych of the earth flanked by images of an orchid and a sea turtle. The copper-colored map of the earth is of the super-continent Gondwanaland, the prehistoric continent that combined the current seven continents. The iris symbolizes the plant kingdom and life on land while the turtle symbolizes the animal kingdom and life in the sea. These symbols represent life as it existed long before the appearance of human beings on earth.

“When I do public art, I make things that belong to everybody.”

ROBIN BRAILSFORD (b. 1953, Boston, Massachusetts) earned a Bachelor of Fine Arts from Syracuse University and Master of Fine Arts from the University of New Mexico. She is a founder and director of Public Address, a public art advocacy group. She is the recipient of awards from the American Institute of Architects, American Public Works Association, American Society of Civil Engineers, California Construction Association, National Endowment for the Arts and Western Council of Construction Consumers. Brailsford was selected to be the arts interpretive specialist for the Spring Mountain National Recreation Area in Mount Charleston, Nevada. Her numerous public commissions include artworks for parks, municipal buildings and transit services in Arizona, California, North Carolina and Texas.