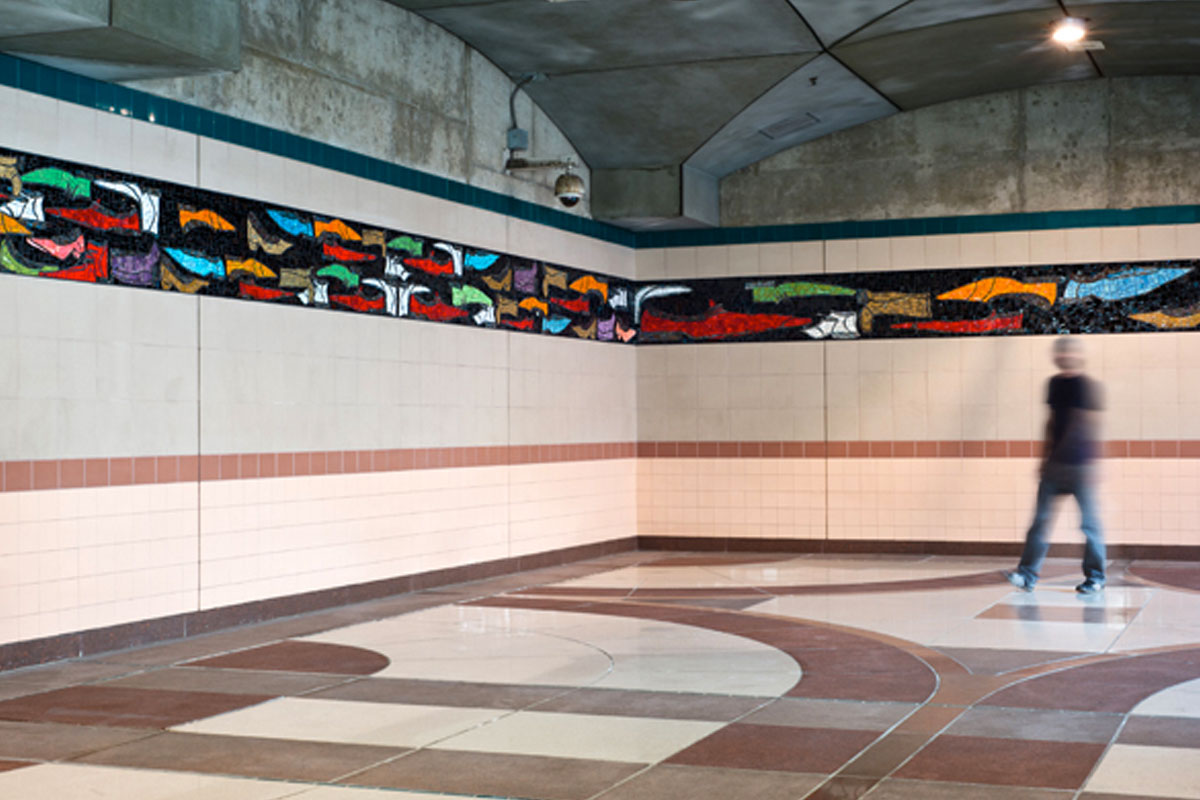 Tyree Guyton designed this artwork to evoke thought, create conversation and stimulate the observer to think about the most basic mode of transportation – the shoe. Guyton explores the power of transportation by examining movement through shoes as a metaphor of shoes representing individuals; all colors, styles, shapes and all moving in different directions.

Made of smalti and cake glass, the 2 foot by 115 foot mosaic band wraps across three walls at the station mezzanine entry and was created by artisans at the Miotto Mosaic Art Studio in Carmel, NY.

“I see the power of movement through shoes – shoes of all colors, all sizes, all styles, all shapes and all moving. Shoes then become the transient tool moving the human spirit from place to place and in all directions. Without the energy of people in motion, there would be no need for other types of motion.”

TYREE GUYTON is founder of the Heidelberg Project in Detroit Michigan. He has been an active visual artist for more than 20 years, having gained international recognition for his creative art environment on Heidelberg Street.  The Heidelberg Project has infused life and energy into a deteriorated urban neighborhood in Detroit. Guyton has been featured in major publications, books, and television and was the subject of the Emmy Award winning documentary Come Unto Me, the Faces of Tyree Guyton. He was also the subject of a book published in 2007 by WSU Press Connecting the Dots, Tyree Guyton’s Heidelberg Project, a 2008 Michigan Notable Book. Guyton has exhibited works in the U.S., Europe and South America and has created large- scale installations in New York, Minnesota and Indiana. He is the recipient of numerous honors including an honorary Doctorate of Fine Art from the College of Creative Studies in Detroit, the Rudy Brunner Award for Urban Excellence, Environmental Design and Research Award and the Award of Artistic Recognition issued by Detroit Mayor Kwame Kilpatrick.