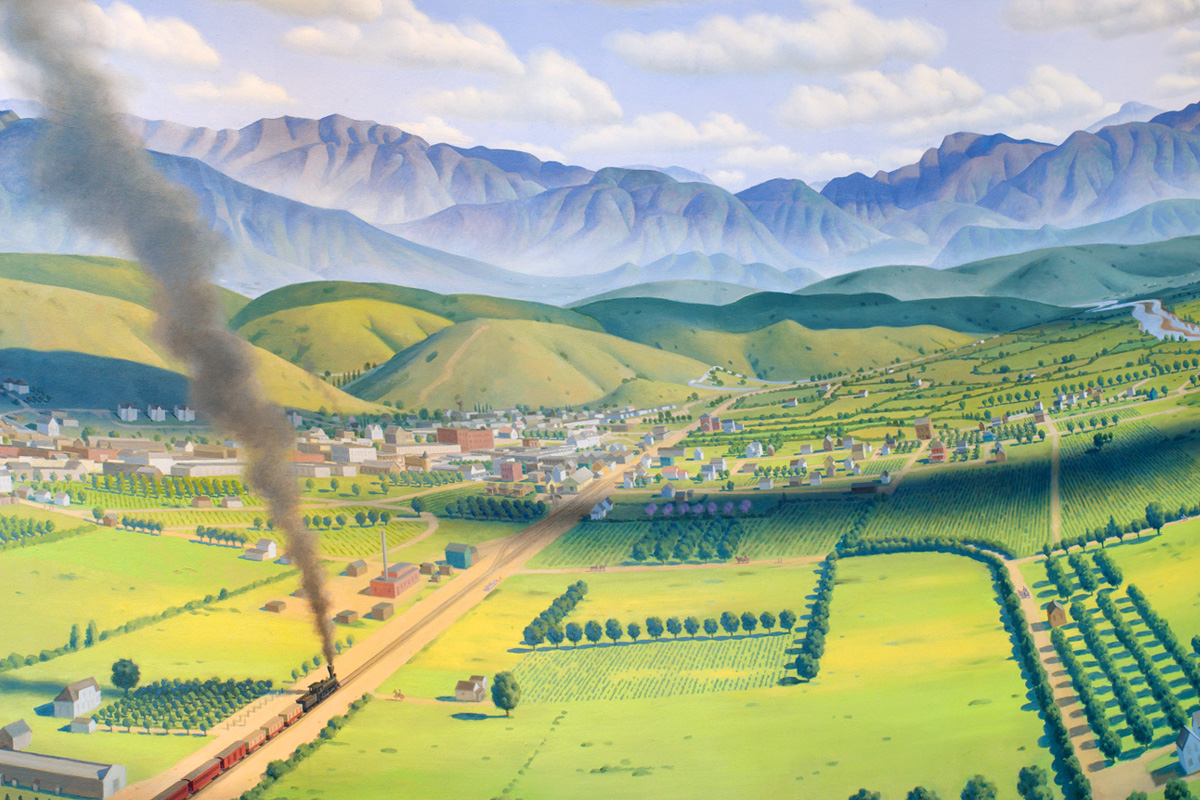 James Doolin’s series of four major murals are conceived to show the astounding scale and grandeur of Los Angeles history and thereby the need for the best public transit systems.

The central panel, Circa 1870, depicts a pristine approach to Los Angeles as it might have looked soon after the coming of the railroad with a view looking north up Alameda Street. It is flanked by panels of Circa 1910 and Circa 1960.

Circa 1910 is a view looking northwest and shows Los Angeles forty years after the central mural. The population has grown over fifty times larger, and there are many trams along the streets. In the foreground is the Los Angeles River, the First Street Bridge and several steam trains. The background shows the developing city spreading west over Bunker Hill to the Santa Monica Mountains and the Pacific Coast.

Circa 1960 is a view looking east and shows Los Angeles in the 1960s. City Hall is visible, buses move along downtown streets, the freeways are constructed (including a four level interchange), and an orange haze is beginning to form over the city.

On the floor above, the large After 2000 mural reveals the artist’s imagined view of the future   looking west from a vantage point above the Los Angeles River. In the center of the foreground is the Gateway Transit Center. The city beyond resembles a circuit board, full of energy and activity, all connected by indispensable transit systems.

In addition to creating the four murals Doolin participated in the selection of the lobby floor paving design. He was assisted in painting the murals by James Feruzzi and Myles Jamieson.

“As Los Angeles enters the 21st Century it’s time to take a grand look at our vast and astonishing city. In that spirit, my three murals at the first level of the Metro Headquarters Building examine and portray stages of growth in the urban giant we have created for ourselves since the time of our first railroad. Appearing like a huge, organic circuit board, the fourth mural on level three speculates on some of our city’s changes during our passage into the next century.”

JAMES DOOLIN was educated at Philadelphia University of the Arts and at UCLA. He has created large landscape paintings about Southern California for over 20 years. Doolin’s work is represented in many public and corporate collections and is reproduced in numerous books on America. He has received a Guggenheim Fellowship and three NEA grants.