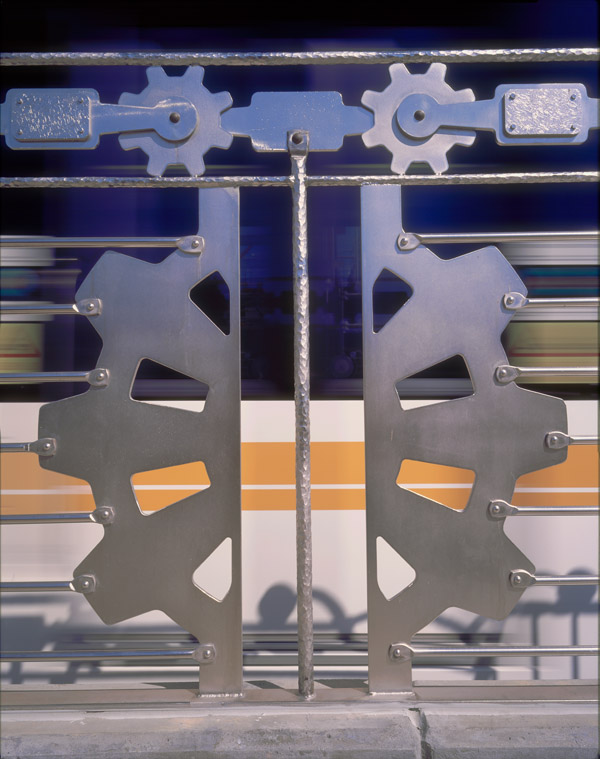 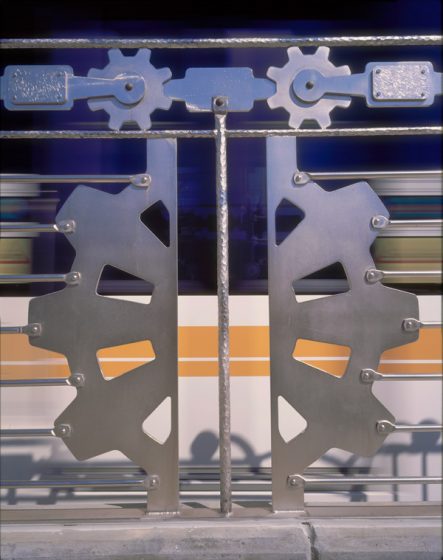 Artist Ries Niemi has created 550 linear feet of hand-wrought fencing for this station. Influenced by the historical Art Deco buildings of Pasadena, the Craftsman Style detail of architects Greene & Greene, and the beauty of machines and trains from the Industrial Revolution, Niemi designed and fabricated stylized discs, axles, arcs, pistons, turntables, and rails to provide a rich visual vocabulary in stainless steel and bronze.

Commissioned by Urban Partners LLC, and in keeping with the City of Pasadena’s public art policy, the artist has also created four 6-foot in diameter medallions that crown the top of the plaza elevator tower. The medallions are made from forged bronze, and contain customized lighting elements. Four stainless steel panels at the base of the tower enclose the stairwells to the parking garage below, and suggest fragments of large mysterious machines.

The project reflects a contemporary interpretation of the nostalgic design elements that made streamliners and early passenger trains popular and created a culture of sophisticated and elegant travel.

“In this work I have created an ‘alphabet’ of components and shapes, which I have then combined into many different ‘sentences.’ The work was largely created through an improvised process, almost like playing jazz, where each segment was tried in a variety of ways before the right one suggested itself. In the end, the piece is a lyrical and rhythmic narrative about the glory and mystery of machines.”

RIES NIEMI participated in one of the first artist design team projects in the country—the Creston Nelson Substation—in Seattle, WA in 1979. Since then, he has created many public artworks, including projects for the Anacortes Public Library in WA; Mariner’s Baseball Stadium, Seattle, WA; San Antonio Convention Center; and King County Regional Justice Center, in Kent, WA. He is currently working on public artworks for the Snohomish Public Library in WA; Valley Metro Rail in Phoenix, AZ; Tacoma City Hall, WA; and the Great Mall Station, Santa Clara Valley Transportation Authority in Milpitas, CA.