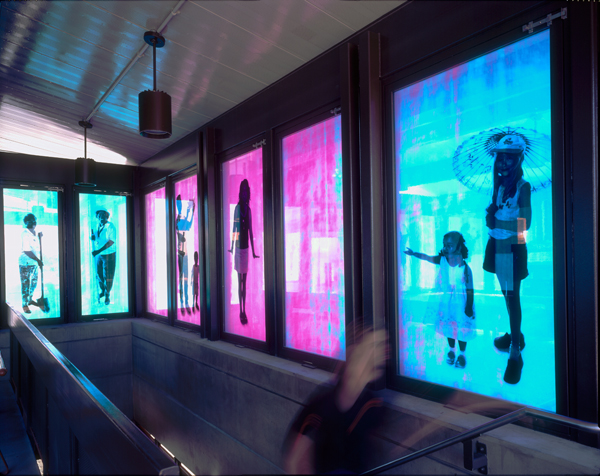 Although surrounded by shops, restaurants, and office buildings, the heart of Lake Avenue lies not in its commercial core, but in the people who frequent the area and commute through the rail station. Artist Pat Ward Williams used people in transit as the subject for her artwork at the station. Area residents modeled for the artist, and she captured them in the act of pointing, waving, laughing, talking, reaching, rushing, scolding, waiting, and daydreaming. The resulting human-scale black and white photographic portraits were emblazoned on dichroic glass panels that frame the station entry galleries bisected by Lake Avenue.

The station’s artwork is experienced as silhouetted portraits against colored glass panels. The dichroic glass panels change subtly from shades of gold to turquoise to fuschia as the viewer moves around and through the station gallery, and the portraits take on infinite detail and gesture. Commuters can view their own life-sized reflections in the glass, creating an animated dialogue between the actual and the illustrated. The photographs contribute to a visual vocabulary that communicates to passengers and passersby alike the collective qualities that unite us all. 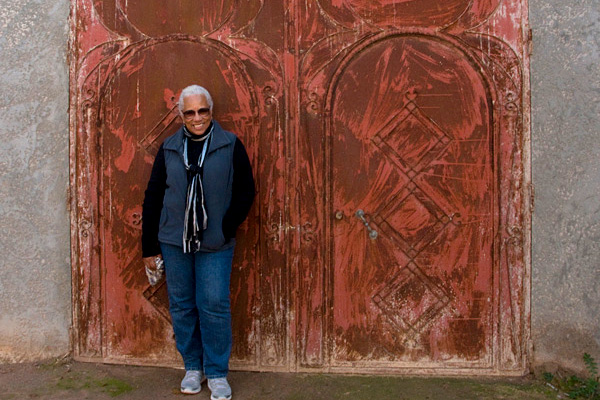 PAT WARD WILLIAMS holds a Master of Fine Arts in photography from Maryland Institute College of Art, Baltimore, MD. Her public art commissions include a project for the Hollywood & Highland Entertainment Center, Hollywood, CA; and the Gilbert Lindsay Memorial at the Los Angeles Convention Center. She has received many awards, including: a Ford Foundation Grant; two National Endowment for the Arts Photography Fellowships; a California Community Foundation Getty Trust Fellowship; and a Fulbright Regional Research Fellowship in Johannesburg, South Africa. Her work has been exhibited nationally and internationally, and has been included in shows at the: Los Angeles County Museum of Art, Los Angeles; the Whitney Museum of American Art, New York; the Smithsonian Museum, Washington, DC; and the Contemporary Arts Museum, Houston, TX