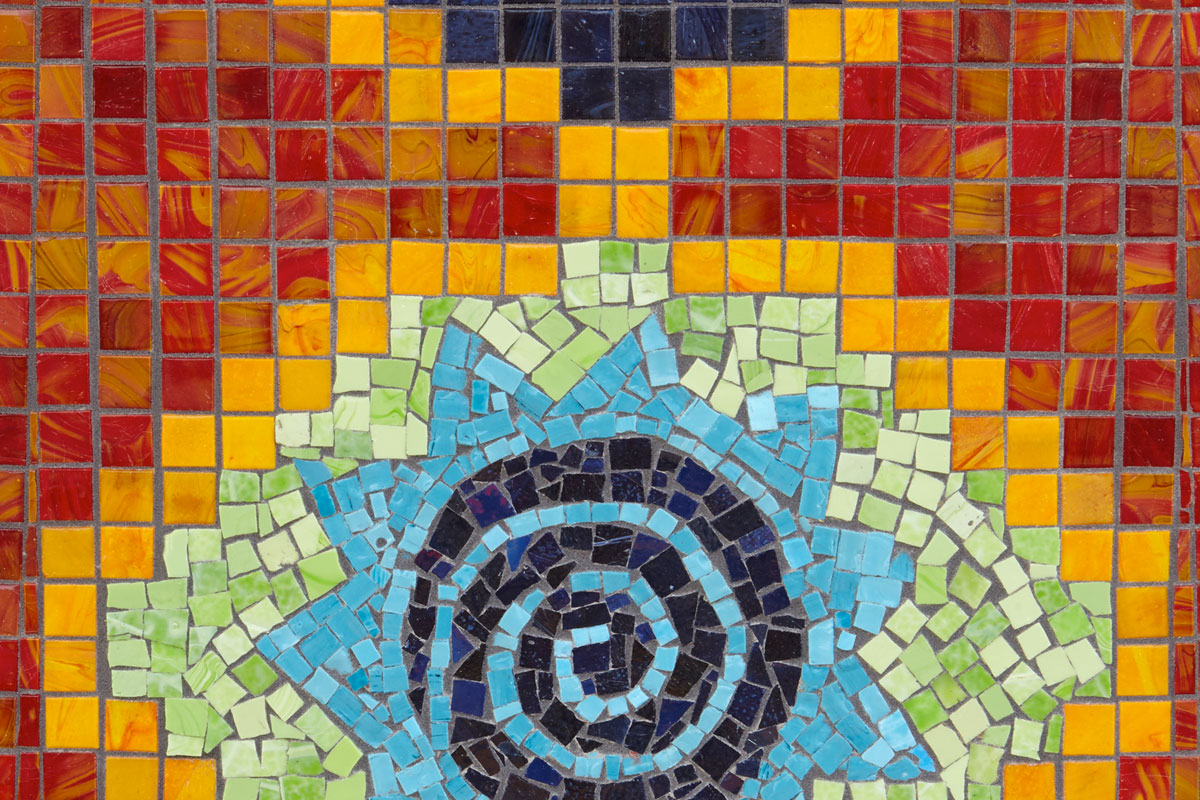 Serving as a landmark and gateway for the City of Azusa, Jose Antonio Aguirre’s A Passage Through Memory (2015) is inspired by local historic architecture and the cultural traditions of the region’s earliest inhabitants. A pair of monumental Spanish colonial-style arched portals is placed at the entry ramps leading to the station platforms. The 16-foot-tall glass-fiber-reinforced concrete structures are each topped with the Azusa name and an illuminated metal crown motif in tribute to the city’s prominent 1923 World War I monument that was removed in 1946. Colorful handmade glass mosaics incorporating designs from native Gabrielino basket weaving wrap the bases of the eight canopy columns on each platform. Aguirre worked with students from Azusa Pacific University and visitors to the Mexican Cultural Institute at El Pueblo Historical Monument to create the mosaics.

“I was inspired by the local expressions of cultural identity and how ancient images that have been painted on rocks in the area or woven into vessels centuries ago by this region’s tribal ancestors have survived as sacred icons and still resonate today. They have the power to collapse time and space between the generations and create a portal for new discoveries.”

JOSE ANTONIO AGUIRRE (b. 1955, Mexico City) earned a Bachelor of Fine Arts from the Art Institute of Chicago and Master of Fine Arts from the California Institute of the Arts. His paintings and works on paper have been included in numerous exhibitions internationally and are held in the permanent collections of prominent institutions in Germany, Mexico, Scotland and the United States. Aguirre was awarded a Fulbright-García Robles Scholarship for research in community public art projects at the Universidad Autónoma Metropolitana–Azcapotzalco. His public commissions include more than 35 permanent artworks in Southern California, Colorado, Illinois, Texas and Mexico. Among his most ambitious is a double-tower mosaic mural for the East Los Angeles Library.