For her artwork, Andrea Bowers will imbue the glass walls of the station’s entrance pavilion with messages of unity and democracy through her translation of the slogans “El pueblo unido jamás será vencido” (the people united will never be divided) and “By independence we mean the right to self-determination, self-government and freedom.” The first text is often heard chanted at marches and political demonstrations around the world. It originated in Chile between 1969 and 1973 in support of Salvador Allende’s presidential election and evolved into an anthem composed by Sergio Ortega for the Chilean Popular Unity coalition. The second is taken from a mission statement of the Brown Berets, a Chicano civil rights group founded in East Los Angeles and active during the late 1960s and early 1970s. The artwork is inspired by the station’s location in downtown Los Angeles, which is a regular meeting place for people from all over the region to exercise their political voice through rallies, marches and street theater: City Hall, the LAPD Headquarters, Hall of Justice and the US Courthouse are all within a two-block radius of the station. In conjunction with the artwork, the artist plans to engage the community by hosting local musicians performing Ortega’s song.

“I seek to reflect the diverse communities that regularly gather downtown to express their voices and their rights.” 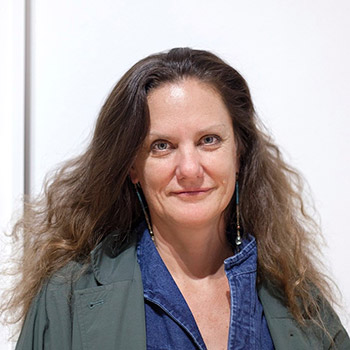 ANDREA BOWERS (b. 1965, Wilmington, Ohio) creates drawings, installations, videos and photographs centering on the convergence of art and activism. She earned a Bachelor of Fine Arts from Bowling Green State University and a Master of Fine Arts from California Institute of the Arts. She is the recipient of awards from the Louis Comfort Tiffany Foundation and United States Artists. Her work has been exhibited extensively throughout the United States and Europe, and is in the permanent collection of the Hammer Museum, Hirshhorn Museum, Museum of Modern Art, New York, Museum of Contemporary Art, Los Angeles, Museum of Fine Arts, Houston, Tate Modern and Whitney Museum of American Art, among others.