The artwork at the Chinatown Station is based on the ancient Chinese book of I Ching (translated in English as the Book of Changes). Written more than 3,000 years ago, the I Ching describes 64 states of human situations.

On the station’s plaza level, a 34-foot Ba Gua—an octagonal-shaped Chinese symbol—created from railroad tracks pays tribute to the early Chinese railroad workers of the 1800s. The Ba Gua represents the eight elemental forces of nature—Fire, Earth, Lake, Heaven, Water, Mountain, Thunder, and Wind—which are the building blocks for the hexagrams of the I Ching. Sixty-four granite pavers depicting the hexagram symbols were placed throughout the plaza with the assistance of students from Castelar Elementary School in Chinatown.

The artist created four distinct benches located on the plaza and platform levels containing Italian, Croatian, Latino, and Chinese images reflecting the communities of Chinatown today. On the station’s mezzanine level, the artist has created a granite-inlay I Ching dial 16-feet in diameter with radiating segments displaying the 64 hexagrams as detailed in the ancient book. At the center of the dial is a glass-encased compass that is visible as one looks upward from the plaza level. The compass not only provides the passengers with a point of orientation upon arriving and leaving Chinatown but it also reflects upon the fact that it is a Chinese invention. 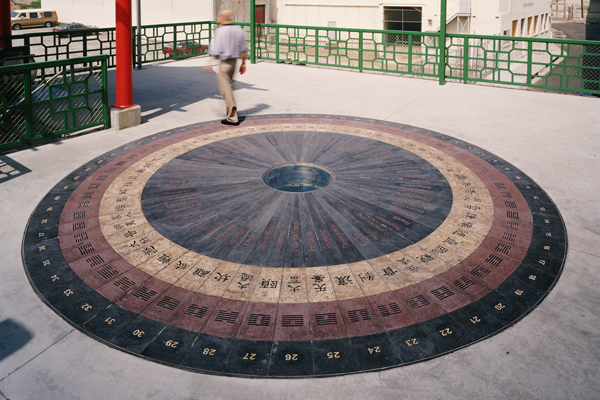 “I selected the I Ching as the concept for my art at the station because the I Ching encompasses the fundamentals of Chinese philosophy and culture. The I Ching became the basis for Confucian and Taoist thought and today its influence is best seen in the practice of Feng Shui, the concept of the Yin and Yang, and the symbol of the Ba Gua. I thought the I Ching would be appropriate because its influence not only has permeated into all aspects of Chinese culture but it also has influenced western thought and the American culture since the 1960s.”

CHUSIEN CHANG received her Master of Fine Arts from UCLA. She has exhibited her artwork in galleries and museums throughout the Los Angeles area as well as in Norway, Pennsylvania, and New York. Her other works include a public artwork in Shanghai, China, and two installations at the Los Angeles River. She has collaborated with numerous artists, performers, and musicians on interdisciplinary projects, and has received several awards and grants.