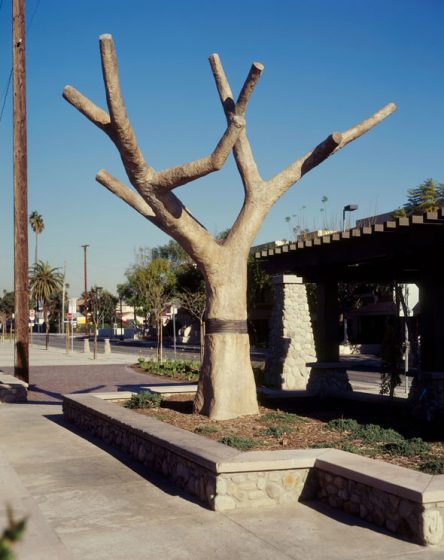 Artist Jud Fine took his cue for the station artwork from the Greene & Greene-designed Oaklawn Waiting Station, built in 1906 on Fair Oaks Avenue. For the station project, Fine created an 18-foot tall copper-bound “Stone Tree” with bluntly cut limbs that rise staunchly amidst a backdrop of heavy wood beams and arroyo stones. Referencing the mythical tree of life, it stands as a formidable icon to the Craftsman Style of architecture known throughout the area, and represents the movement’s joining together of natural elements and human design.

Fine’s replicated tree is reminiscent of the ficus trees that line the streets throughout Highland Park. Two elderly examples of these trees still exist on Avenue 58 adjacent to the station, and have “enveloped” their original steel tree cages just as Fine’s “Stone Tree” is burgeoning around its wrapped copper cable.

On the station’s platform, two canopy-support posts turned topsy-turvy with structural limbs anchored to the ground provide seating for waiting passengers. Referred to as “Inverted Post” by the artist, these elements represent a counterpoint to “Stone Tree”, with symbolic roots reaching toward the heavens and branches piercing the earth. Balanced atop each inverted post is a 3-foot in diameter blue illuminating globe (“Water Light”), which becomes a metaphor for water as well as light.

“This station represents an environmental merger of design, function and setting. Its plaza is grounded as neighborhood ‘home’ before the journey takes one beyond the station. The community in which it is sited is unique, meriting underline, not imposition. The total work is an interlacing of physical moments that function as a poetic foundation and simultaneous overlay, connecting links to a pattern at once elusive and apparent.”

JUD FINE received his Master of Fine Arts from Cornell University in New York. He has been the recipient of many awards, grants, and fellowships. His artwork has been exhibited and collected in museums and galleries throughout the world. He often collaborates with artist Barbara McCarren. Both individually and as McCarren/Fine, his recent art commissions include: Split Mound, an earthwork for the San Francisco Zoo; Modestopo, the Civic Plaza of Modesto, CA; Eureka, the lobby of the California State Department of Education Building, Sacramento; Mark, a linear narrative for the Ventura River Trail; and Maiz, an interactive landscape for Cesar Chavez Park, Long Beach, CA.