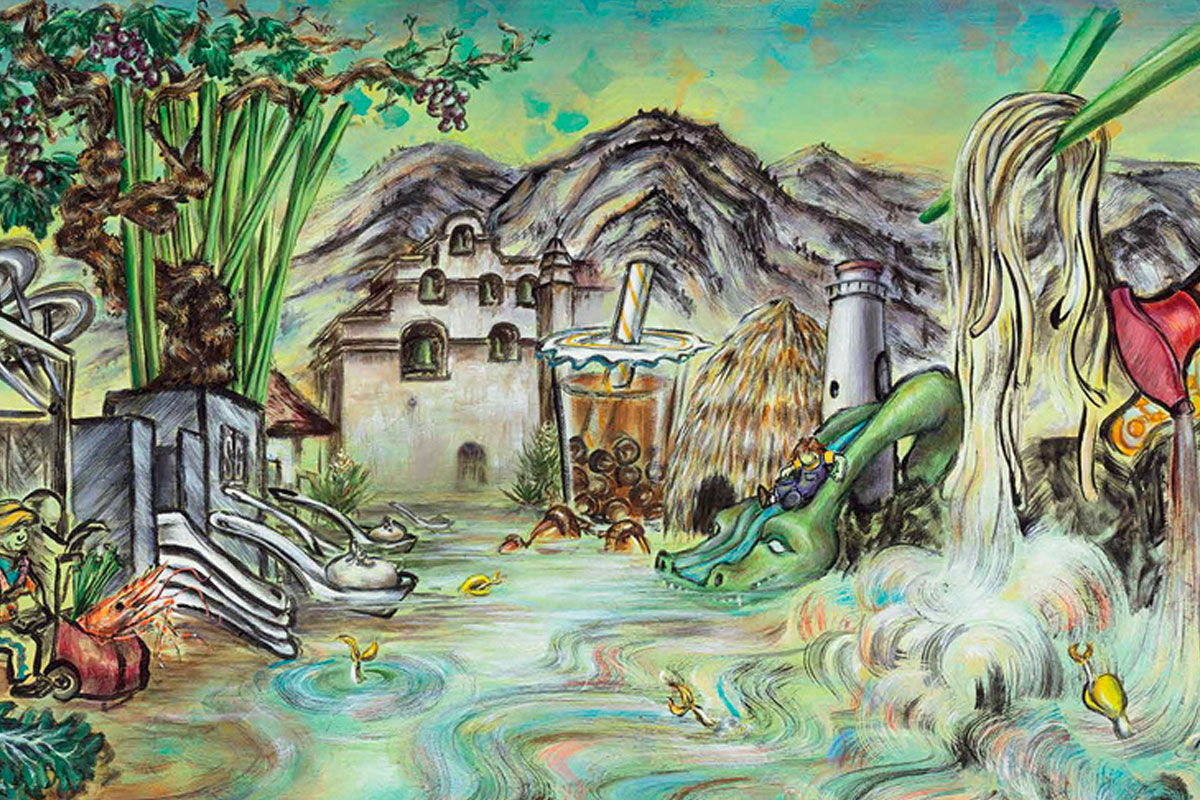 Sandra Low’s vision of San Gabriel, Dream Connect San Gabriel, pairs contemporary features with historical roots in a surreal landscape set before the San Gabriel Mountains and inspired by traditional Chinese landscape painting. At its center is the late-18th-century Mission San Gabriel Arcángel, an important city landmark that once boasted California’s largest vineyard. Representing the Gabrielino-Tongva tribe—who not only built the mission but also laid the foundation for the city—are a willow-and-grass dome-shaped house as well as the dietary staples yucca and acorns.

Elsewhere, noodle-and-soy sauce “waterfalls,” chopsticks, boba tea, bean sprouts and dumplings represent the celebrated Asian cuisine for which the city is known. The lighthouse and serpent slide pay tribute to the whimsical, concrete play sculptures at La Laguna de San Gabriel Playground, which were designed by Mexican American artist Benjamin Dominguez. The swirling “multicultural broth” in the foreground is emblematic of the city’s diverse community, past and present, as well as the aquatic theme of Dominguez’s sculptures and the advanced irrigation methods of the mission.

“My painting represents San Gabriel as a city full of cycles of change, and full of history and culture that is warm and inclusive.”

SANDRA LOW (b. 1974, San Diego, California) offers social commentary from a cross-cultural perspective through humor, parody and a collage aesthetic in her paintings, drawings and mixed-media works. She was raised in LA’s Chinatown and the San Gabriel Valley, and she earned a bachelor’s degree in art and sociology from the University of California, Berkeley, and a Master of Fine Arts from the University of Southern California. Her work has been exhibited throughout Southern California. Low has taught art at Long Beach City College, Pasadena City College and Rio Hondo College, juried and curated exhibitions, and been awarded several local public art commissions.