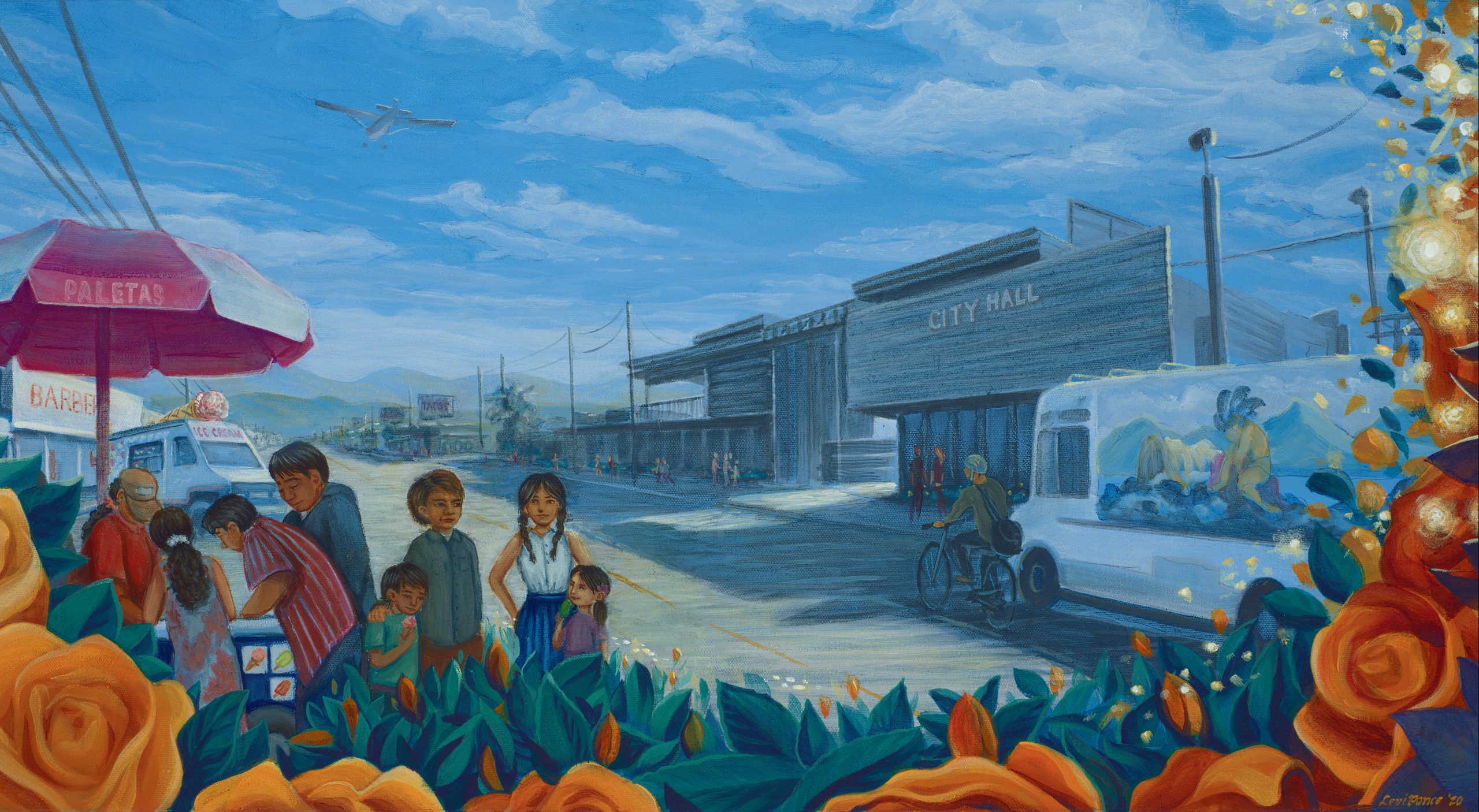 Flowers bloom around community in Levi Ponce’s depiction of his San Fernando Valley neighborhood of Pacoima. Residents support small businesses and enjoy ice cream along wide open Van Nuys Boulevard, the longest commercial stretch and heart of the neighborhood, with a sense of unity and a touch of pastoral sentiment. The recent Pacoima Neighborhood City Hall, constructed in 2011, sits side-by-side next to open streets and across from local shops as clouds float toward the foothills.

“I appreciate the need for new infrastructure and mass transportation (with the coming Metro light rail), and simultaneously, I cherish the unique moments we have now in a part of LA that forgets it is a big city. It still feels like there are fields of produce and flowers just around the bend.”

LEVI PONCE (b. 1987, Pacoima, California) has been studying art and form since childhood, influenced by his parents— a signmaker and a seamstress. He earned a BA in 3D Animation at Cal State University Northridge. Ponce organizes and paints community murals to serve as catalysts which bring together a wide range of artists, business owners, and youth in Los Angeles, inspiring people to take control of their communities and leading to the re-discovery of LA’s Mural Mile along Van Nuys Blvd. His work has been featured at the Skirball Center, the Petersen Museum and Super Sonico Music Festival, and by Katy Perry and Vans Art. Media coverage includes The Los Angeles Times, La Opinión, LA Daily News, PBS, Sony, Welcome to Los Vargas, Fox 11’s Good Day LA, CNN Latino, BBC Mundo, Univision, Telemundo, MUN2, MTV Tr3s, Azteca TV, KPFK 90.7FM, La Opinion, KCET, The Huffington Post, and more. MSN’s Latinzine named Ponce one of the Top 10 Latinos to Watch in the United States in 2014 and Ponce has worked with Walt Disney Imagineering on worldwide attractions including The World of Pandora, Frozen, and Star Wars, digital compositing for Star Wars: The Force Awakens (2015) and VFX work for Interstellar (Winner, Best Visual Effects 2014).