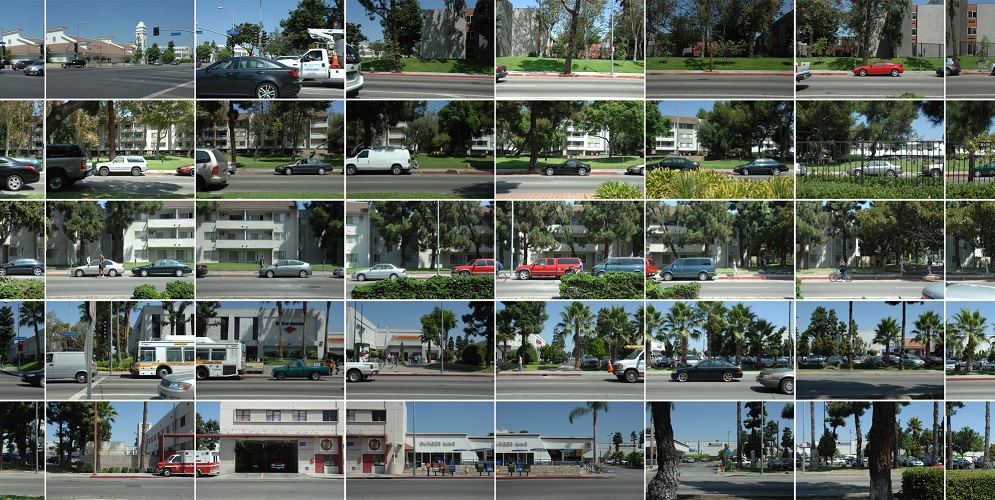 Robbert Flick presents the landscape of the major streets surrounding Expo Park and USC as a stream of images one might encounter through the window of a moving vehicle. By slowing down the process of looking, the viewer  discovers segments of neighborhoods that when pieced together, create an overall impression.

Flick photographed Adams and Jefferson Boulevards on the north end of the area, Martin Luther King Jr. Boulevard and Vernon Avenue on the south end, San Pedro Street and Central Avenue to the east and Budlong and Normandie Avenues to the west.  The art panels present these thoroughfares as they existed at the time they are photographed.

“These East/West and North/South corridors are on the verge of major change and have already a little known but well documented history.”

ROBBERT FLICK is represented by Rose Gallery in Santa Monica and Robert Mann Gallery in New York. Most recently, his work has been featured in Under The Big Black Sun: California Art 1974-1981, at MOCA The Geffen Contemporary and Sight Specific: LACPS and the Politics of Community, at the Fisher Museum, USC. Other recent and notable exhibitions include Street Sight, at the Armory Center for the Arts, Pasadena, CA and Robbert Flick: Trajectories at the Los Angeles County Museum of Art. Flick is the recipient of numerous awards including a Guggenheim Fellowship, two National Endowment for the Arts Individual Artist Fellowships, a Ford Foundation Faculty Enrichment Grant and a Flintridge Foundation Award. Flick is Professor of Photography at the University of Southern California Roski School of Fine Arts, where he has taught since 1976.