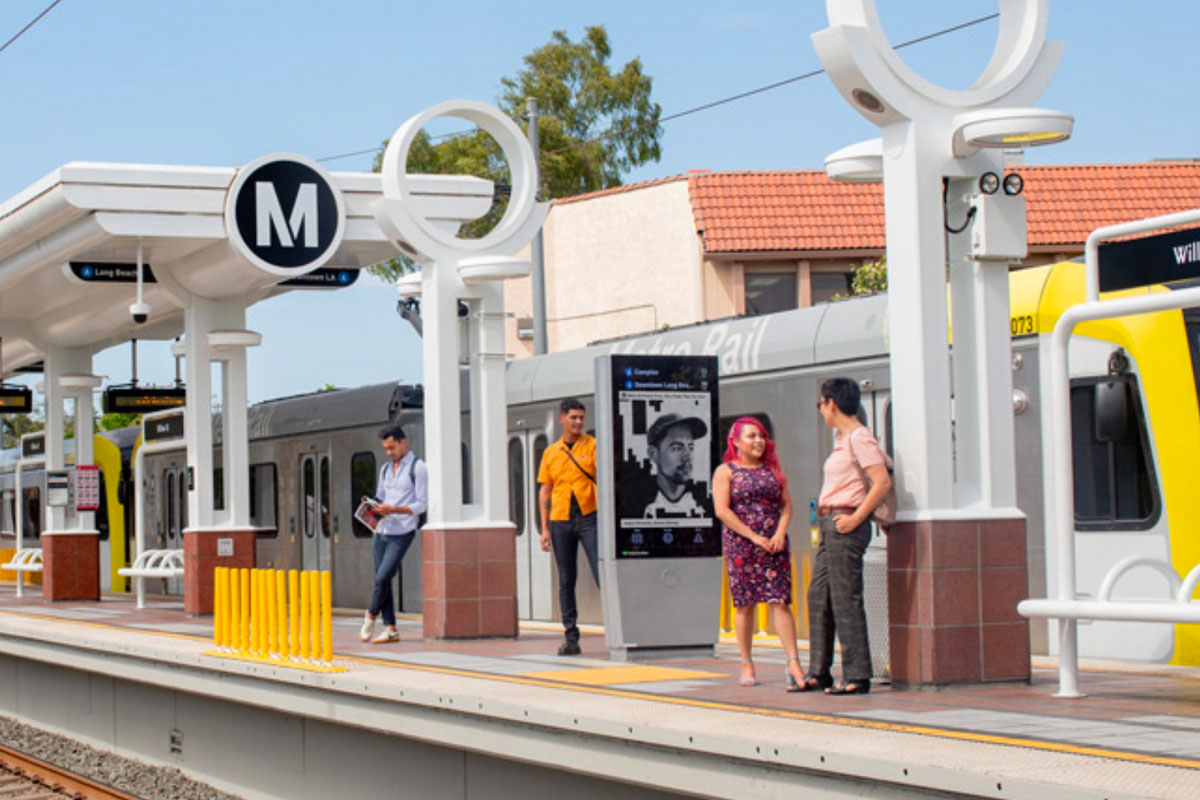 Metro Art Portrait Series: More People Than You Know is designed to feature and engage the different neighborhoods surrounding the stations of the Metro system. This rotating exhibition features portraits of patrons created by artists connected to the neighborhoods served by the A Line (Blue).

Born in Los Angeles, ERIC ALMANZA is a Chicanx figurative painter and curator with a BA in Art Practice from UC Berkeley and an MFA in Figurative Painting from Laguna College of Art and Design. Almanza taught in Wilmington for many years and currently teaches fine arts in the Los Angeles Unified School District.

KRISTINA AMBRIZ moved to Long Beach in 2011 with her husband to pursue her artwork. Her work has been exhibited at various galleries and venues throughout the Los Angeles region, including the Bergamot Station, the Liberty Art Gallery in Long Beach, and the Downey Civic Theater.

JAZMINE ATIENZA is a painter, tattoo artist, and graphic designer whose art practice is a personal reflection of her place in life. Her most recent focus is figurative painting. Atienza moved from Brooklyn NY to Southern California in 2013 to explore Filipino tribal culture and tattooing.

DANIEL BARAJAS, a Mexican-American visual artist, received his BFA in Drawing and Painting from California State University, Long Beach in 2018. He has a professional background in design and illustration. Barajas uses the human form as his subject, aiming to capture the fragility and melancholy of man.

CAT FERRAZ was born in Belo Horizonte, Brazil. Ferraz received a BFA in illustration and painting from Parsons School of Design. She has exhibited paintings in New York, Austin and Los Angeles and completed international mural commissions.

BODECK LUNA HERNANDEZ, an immigrant from Manila, Philippines, creates artwork that mines the associations between nostalgia, social empowerment, and reliance on disposable technology and consumerism. His background in street art heavily influences his figurative paintings, illustrations, and murals.

ALEPSIS HERNÁNDEZ is a self-taught artist based in Long Beach. Her portraits explore the lives of individuals who are part of her community and personal life. The achromatic palette or her drawings or paintings allow viewers to focus on the subject’s qualities and bring individuals of different subcultures together to create a stronger sense of belonging.

JOSÉ M. LOZA was born in Cuernavaca, Mexico and raised in Long Beach. Loza was introduced to painting through the mentorship of professional muralists via public art programs. Loza is a graduate of Long Beach City College and California State University Long Beach. He is currently working on completing his Arts Education Credential.

CODY LUSBY was born in the Pacific Northwest, raised in Southern California and currently lives and works full time as an artist in Long Beach, He attended both Orange County High School of the Arts and Laguna College of Art and Design. Since his first solo show, “Mustachio rides again” in 2009, Lusby has metamorphosed from classically trained roots into a contemporary realist.

LP ǼKILI ROSS’s artwork springs from recycling sources and recreating and materials outside of their original form. There can be up to 250 layers in a given composition. LP develops techniques that emulate traditional styles of painting in a digital medium.

DAVE VAN PATTEN is a Long Beach/Los Angeles based artist working in illustration, comics, and murals. Van Patten has done album artwork for bands such as the Grateful Dead and Les Claypool. His work has appeared in publications such as, Juxtapoz, Vice and NPR.

For over 15 years, ANGELA WILLCOCKS, a multidisciplinary artist, has been collaborating with diverse communities such as the visually impaired and public organizations to create art that is participatory, permanent, and sustainable. The artist is interested in the way digital media is used to interpret portraiture while maintaining drawing and painting as a foundation of her work.