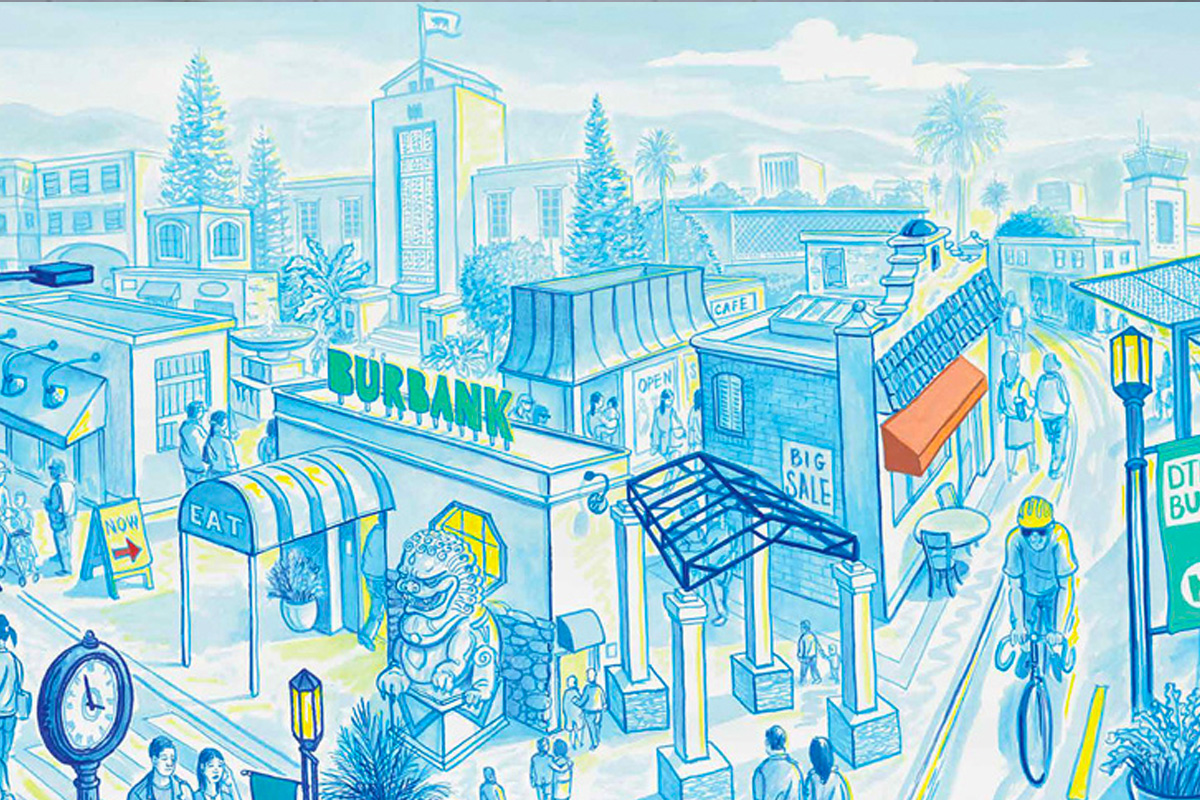 A maze of pedestrian-friendly streets traverses Sandow Birk’s imagined bird’s-eye view of Downtown Burbank. Warm highlights accentuate the principally blue, painted composition in which variously scaled figures stroll, dine, shop, and cycle among charmingly detailed architectural facades, signage, sidewalk planters, and street trees. City landmarks are depicted in the background—such as the Mentzer House on the left, Burbank City Hall and Central Library at the center, and the Bob Hope Airport traffic control tower on the right—before high-rise buildings and the Verdugo Mountains on the horizon.

This artwork was commissioned in 2019 for Metro’s Through the Eyes of Artists poster series for display in the fleet.

“Inspired by the blue-and-white mural traditions of Spain, Portugal, Mexico and others, I predominantly used blue hues to tie the image to historical works and my past work. I added highlight colors to make things pop, as well as a warm sunset glow which gives the feeling of a welcoming Southern California afternoon.”

SANDOW BIRK (b. 1962, Detroit, Michigan) is best known for examining contemporary social issues—from inner-city violence, prisons, terrorism and wars—in expansive multimedia projects. Raised in Southern California, Birk earned a bachelor’s degree from the Otis Art Institute of Parsons School of Design. His work is in the permanent collections of the Los Angeles County Museum of Art, the Metropolitan Museum of Art, the Portland Art Museum and the San Francisco Museum of Modern Art, to name a few. Among his numerous commendations are grants from the Fulbright Program, the John Simon Guggenheim Foundation, Los Angeles’s Department of Cultural Affairs, the National Endowment for the Arts and the Smithsonian Institute, and residencies from the Ballinglen Arts Foundation, Cité Internationale des Arts, Montalvo Arts Center and Tamarind Institute, among others. Birk’s other public artworks can be seen throughout California in Avalon, Long Beach, Los Angeles and San Francisco.